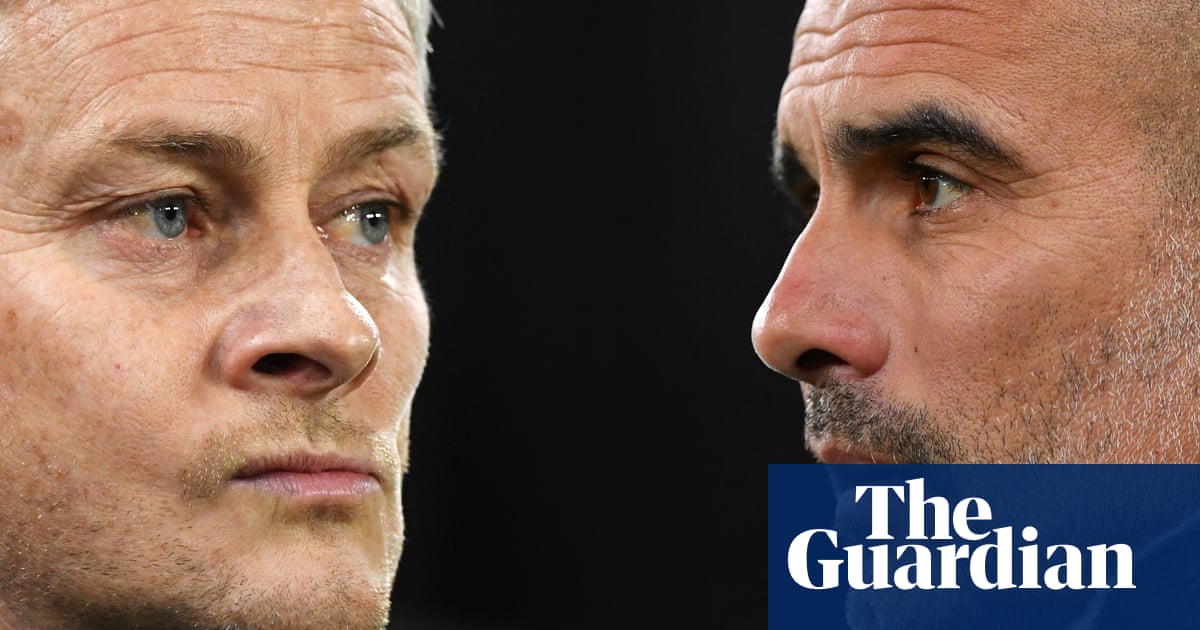 Pep Guardiola has reacted to Ole Gunnar Solskjær’s suggestion that Manchester City’s players will push the boundaries in Wednesday’s derby and accused the United manager of trying to influence the referee.

Solskjær’s belief is that City will press hard at Old Trafford and foul United high up the pitch because there is less chance of them being booked for misdemeanours in those areas. “You don’t get the yellow cards [there], do you? But that’s just because they commit so many players forward and you can clearly see that they’ve got them in that mould of trying to win the ball back, and they do make fouls,” the United manager said.

Manchester United at Old Trafford are not scary any more, says Pep Guardiola

“It’s up to us to play through that press, be ready enough, play one- and two-touch, don’t give them time. It’s not my decision, it’s the referee’s responsibility to do that.”

Guardiola was unimpressed. “I don’t like it. No. My team is not built to think and create for that, not at all,” he said and added he thought the United manager intended to put pressure on the referee, Andre Marriner. “That’s the reason why,” he claimed, though he said such a ploy will not work. “No, I don’t think so, because we don’t do that.”

Asked if Marriner may interpret incidents differently because of Solskjær’s view, Guardiola laughed it off. “Really? I don’t know,” he said, before pointing out how talking about referees can lead to disciplinary action. “I don’t want to be suspended. I won’t be in trouble.”

Guardiola also pointed to his approach during his career. “I know exactly what I said to my players from day one to the last day, so when a player wants to attack, we have to be honest and of course there is contact, there are fouls,” he said. “But when it happens and you arrive late – that is why there are referees, to make yellow cards or red cards or whatever they decide.

“But never have I prepared a game to do this. We want to do our game – sometimes it’s not possible. With an average of 65% or 70% with the ball, how do you do that [make many fouls]? I’m concerned about many other things about the game – about how to beat them more than this. Maybe in the press conference after the game you can ask him again about that.”

Privately City are understood to be surprised at Solskjær, the view being the United manager has failed to do his homework regarding the regularity of the fouls.

According to Opta, United have made 195 fouls in the opposition half against City’s 170, though, as Guardiola pointed out, City’s domination of the ball means they may well foul more given the lesser time they are out of possession.

Solskjær will demand a response after losing 4-0 at Everton. United are sixth on 64 points, three behind Chelsea in fourth, though Maurizio Sarri’s team have played a game more and United can also make up more ground when hosting them on Sunday. Arsenal are fifth but if they win their game on Wednesday night they will move to 69 points, meaning United hopes of a Champions League place will be out of their hands.

United must win their last four games and Solskjær believes his team can do so despite losing six of the past eight. “For these players it’s possible but we’ve got to change our mindset,” he said. “We’ve got to be ready for it. We can’t sulk. We can’t be dwelling on what has happened in the last few weeks. We’ve got to be ready and we know football changes like this [clicks fingers].

“On certain days you’re lucky and you win games and sometimes you lose games. In the long run, it’s standards, your professionalism and your value as a footballer that will take over and make you successful in the end. Short-term, definitely we can win these four games.”

Solskjær offered a mixed message regarding whether United can challenge for the title next season. “I don’t think we’ve got the consistency to do that. Over the last 18 games [this time] we’re not far away from them but it’s doing it over the course of a season,” he said before pointing out how only City and Liverpool have taken more points since he took over at United. “We’ve done it for half a season now. Let’s see. You can never say never.”