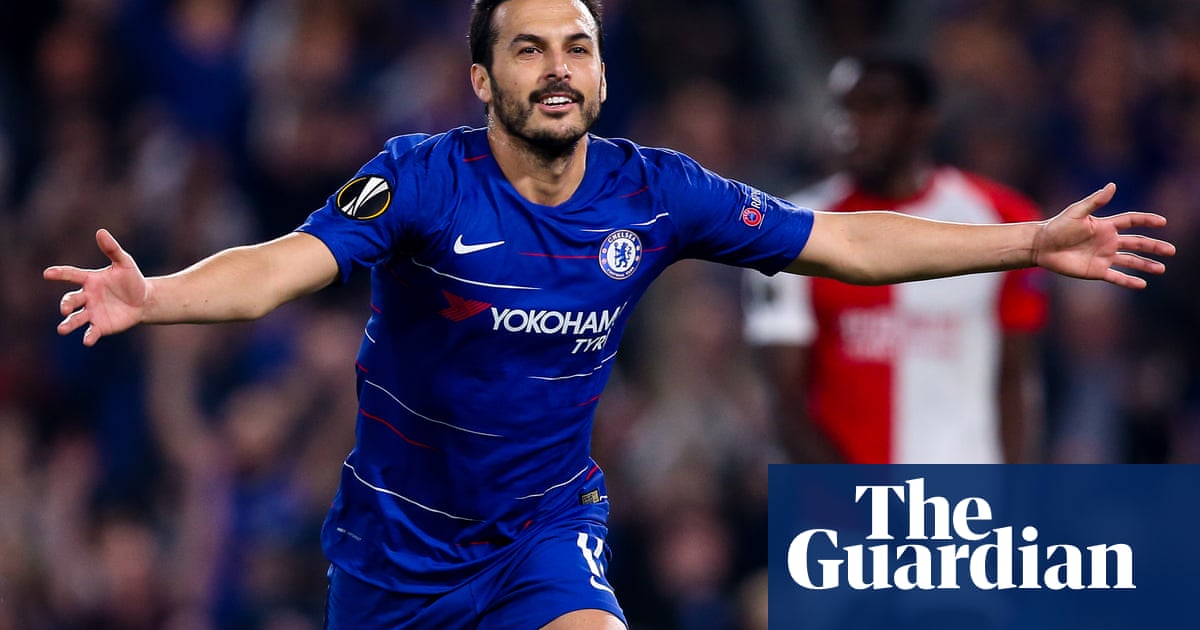 This was the Europa League’s attempt to keep up with all the drama, if not necessarily the underlying quality, of the Champions League’s midweek humdinger. Chelsea emerged from a thrilling contest having seen off Slavia Prague though, having scored four times before the half-hour mark, they could never have envisaged leaning quite so heavily on the narrow victory in the Czech Republic the previous week to progress.

It felt vaguely ludicrous that Chelsea should end up longing for the final whistle, with Kepa Arrizabalaga booked for time wasting, Pedro trudging at a snail’s pace from the turf upon his substitution, and David Luiz panicked into punching the ball away just as Peter Olayinka threatened to burst through on goal late on.

Maurizio Sarri, like Pep Guardiola and Mauricio Pochettino amid the VAR-induced hot flush in Manchester, had flung his jacket away in disgust when Petr Sevcik rasped in his side’s third of the match from distance.

Quite how he would have reacted had the Sevcik not slipped attempting to convert a far easier chance at the far post a few minutes later, just as unlikely parity beckoned on the night, is open to question. Much of this will have displeased Sarri, for all that his team had ripped Slavia to shreds in the first quarter. That had been rather forgotten amid the chaos of the second half, when Chelsea, perhaps lulled into complacency, had panicked and Slavia sensed their opportunity.

Chelsea sill emerged with an 11th European victory of the season – an English club record – to secure a semi-final against Eintracht Frankfurt, but the final in Baku may be a dream if they defend like this.

“As usual in the last two months, we started very badly in the second half,” Sarri said. “We need a solution. In the last 10 matches, we’ve started the second half like in this match, so we need to solve this problem. Maybe we thought we were qualified but, against these opponents, that’s not true. Their physical numbers … I’ve never seen anything like that in the last 20 years: the number of accelerations, the metres at high speed, the running stats. At half-time I told my players the target was to start with the same application and attention but we didn’t.”

Sarri ended up joking he may try avoiding the dressing room at half-time from now on but there is work to be done, not for the first time, on Chelsea’s concentration.

The sight of Sevcik scoring his first under Arrizabalaga, and then topping it with a second thrashed high across the goalkeeper and into the far corner, from virtually identical positions just outside the penalty area, had shocked the hosts. All their earlier authority drained away, with players taking it on themselves to re-establish a healthier lead rather than sticking to the slick interplays which had given the ascendancy earlier on.

Slavia carved out half-chances in what time remained, though none better than Sevcik’s slip but an occasion that had appeared a breeze suddenly felt distinctly onerous.

At least Sarri and his players could cling to that rumbustious opening as cause for optimism. They had shredded their visitors in the opening 30 minutes, with Pedro infuriated not to have a four-goal haul of his own in that time.

Slavia had become preoccupied in fouling Eden Hazard, Ondrej Kudela scarring his opponent whenever he scuttled into proximity. Hazard’s left ankle had been bruised within the opening 80 seconds and bloodied three minutes later when Kudela raked the forward’s achilles near the touchline, ripping the sock in the process. His withdrawal midway through the second half seemed belated, not least given he might have closed down Sevcik for both his goals.

Yet Hazard had made his mark playing a part in two of Chelsea’s goals though Slavia had initially been incapable of repelling any combination summoned by Chelsea – whether involving Hazard or not – as they poured forward.

Pedro had clipped the early opener over the advancing Ondrej Kolar after exchanging passes with César Azpilicueta and Olivier Giroud, then prodded a shot on to the post from point-blank range from Hazard’s cross nine minutes in and watched the ball rebound in off the unfortunate Simon Deli. He later squared for Giroud to score his 10th Europa League goal of the season unopposed.

Even when Slavia summoned a response, courtesy of Tomas Soucek’s booming header from Sevcik’s corner, they were opened up again virtually from the kick-off. Emerson Palmieri and Hazard had combined down the left, with Giroud’s shot pushed out by Kolar and Pedro scuffing in from close range before Deli could react.

At that stage, any kind of comeback felt inconceivable. That Slavia still ended up discomforting their hosts was disturbing and will have Sarri fretting in anticipation of a meeting with Luka Jovic andEintracht Frankfurt next month. “They’re a great team, with a wonderful striker,” he said. “We’ll need to prepare and study them very well because it will be difficult and it’s very important to get to the final. This time I don’t want just to play the final – I want to win the final.”

Eintracht Frankfurt wiped out a two-goal deficit to beat Benfica 2-0 in Germany and advance into the Europa League semi-finals on the away goals rule.

Filip Kostic and Sebastian Rode scored for the Bundesliga side as they clawed back to level the tie at 4-4 on aggregate and then rode their luck to hold on to face Chelsea.

Having done the hard work, Frankfurt were left to thank goalkeeper Kevin Trapp for a brilliant fingertip save to deflect a late minute strike from Eduardo Salvio on to a post.

Valencia set up a date with Arsenal, building on their 3-1 first-leg win at Villarreal to seal a 2-0 victory thanks to goals from Toni Lato and Daniel Parejo.

Pedro pegs back Eintracht Frankfurt with precious away goal for Chelsea

Klopp: Coronavirus? Ask the experts not me

Buy a classic David Squires cartoon from our collection