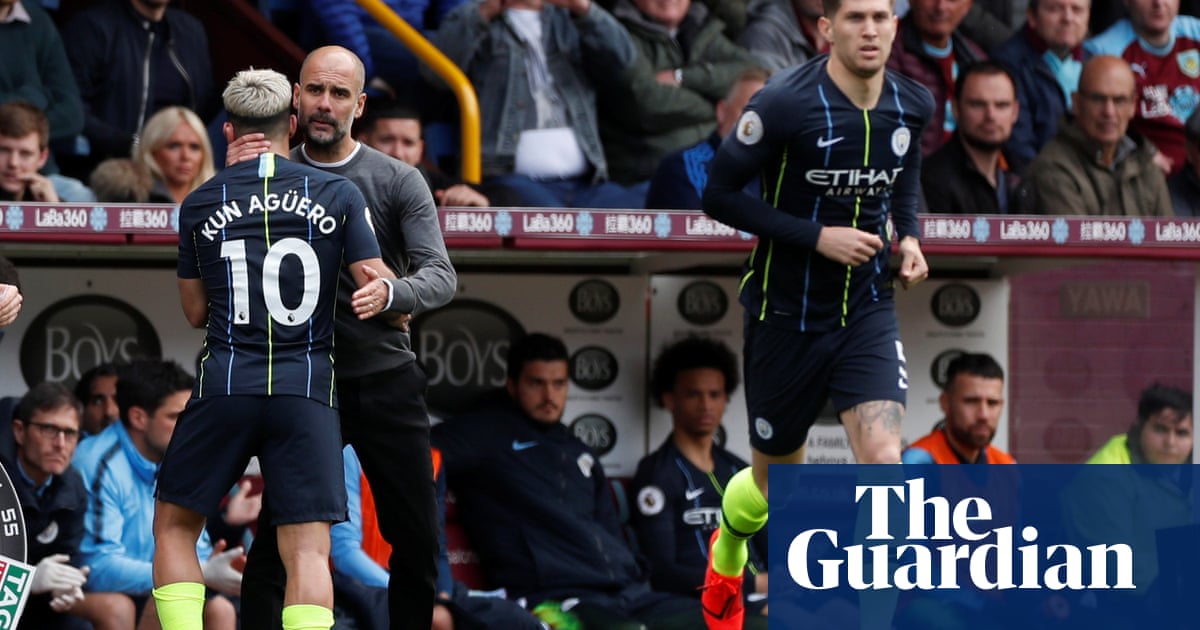 Pep Guardiola praised Manchester City’s “overwhelming” capacity to handle pressure after they overcame the challenge of Burnley to reassume leadership of the Premier League title race.

Sergio Agüero’s second-half goal gave them a narrow win and while City could have won by more, they saw out the final stages with four centre-backs on the pitch as their opponents attempted an aerial bombardment. They escaped with few real scares and Guardiola was delighted with the way they have refocused after recent disappointment.

“It is not easy, especially with our [Champions League] defeat against Tottenham,” Guardiola said. “Our reaction has been outstanding, overwhelming, to come here without Kevin [De Bruyne], without Fernandinho, and play the way we played.”

There is no guarantee Agüero’s winner, which crossed the line by 29.51mm, would have been awarded before the advent of goal-line technology. “I didn’t know it [was a goal],” Guardiola said. “Without technology maybe it is not given. There was a penalty not given but that is why I like it. All we have done in those two seasons, nobody gave us anything, we won it, we did it.”

Guardiola described Agüero, whose goal was his 20th of the league season, as “a legend” and “an incredible player”. He also expressed his disbelief at the cushion City have established against teams who had previously been close rivals.

“We have more than 20 points on United, Arsenal and Tottenham, it is incredible,” he said. “I could not expect that at the start of the season or especially in winter time. We have won 12 games in a row, it is incredible. We have time to rest and go to the Leicester game [next Monday], full gas.”

John Stones and Nicolás Otamendi were both introduced as late substitutes and Guardiola said he had been “trembling” in those latter stages. He was not entirely serious but it was a measure of the situation’s fragility and his opposite number, Sean Dyche, took some pleasure in City’s anxiety.

“It’s a compliment,” Dyche said. “I saw Pep Guardiola with my own eyes, and heard him, screaming, ‘Get it in the corner’. Sometimes they have to do it as well and today was one of those times. It was just really refreshing.”

2020 NFL Draft: Grades and analysis for every first-round draft selection based on value and fit