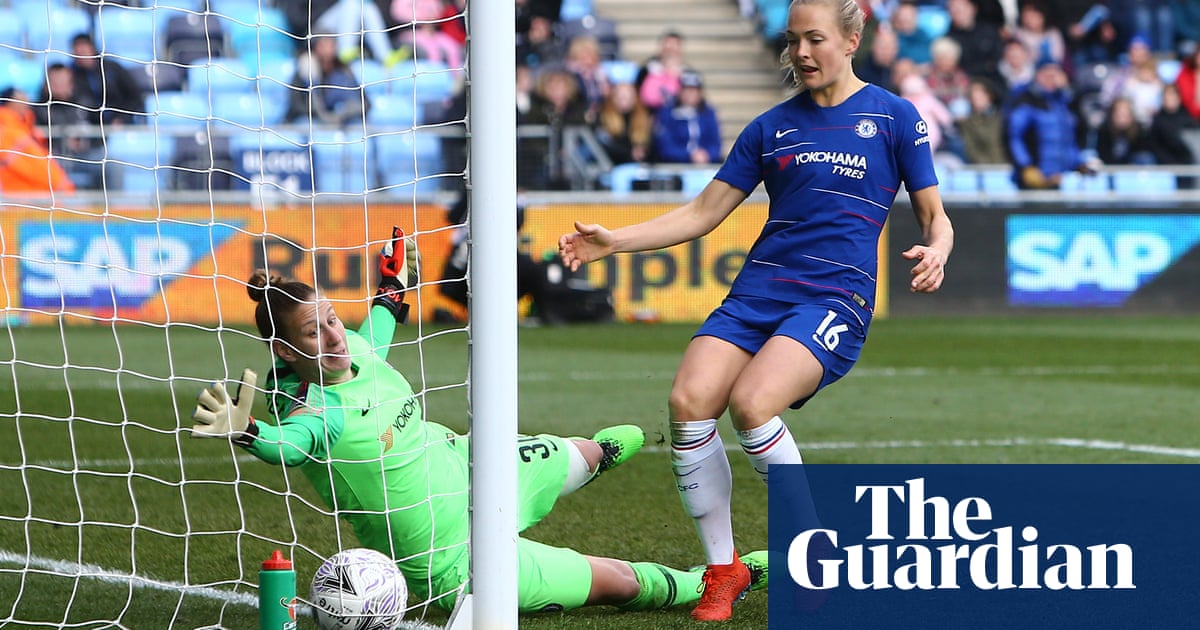 A Magdalena Eriksson own goal in added time handed Manchester City a Wembley FA Cup final date with West Ham. Chelsea had dominated the edgy encounter but a late City resurgence knocked out the holders and kept hopes of a domestic treble alive.

Fran Kirby returned to the Chelsea starting line-up having sat out England’s friendlies against Canada and Spain to protect a knee, while the influential midfielder Ji So Yun could only make the bench.

If the fitness of Kirby was a concern last week, she showed no signs of ill ease. Instead most of Chelsea’s best play flowed through the skilful forward.

Manchester City came from two goals down to take a point when these two met here in the league and they knocked Chelsea out of the Continental Cup at the semi-final stage before going on to lift the trophy.

This time Chelsea had the edge of a cagey first half. Erin Cuthbert had the first chance, skipping into the area from the left before shooting straight at Karen Bardsley in the third minute.

Then City threatened, Caroline Weir playing in Nikita Parris who laid off to Georgia Stanway but Sophie Ingle was there to stifle the shot as the 20-year-old looked to pull the trigger.

Stanway returned the favour two minutes later, pulling the ball back to Parris who turned and shot but Ann-Katrin Berger collected with ease.

From there Chelsea looked the more settled side. Pressing the usually solid City defence high up the pitch, they started to force errors and leave openings. And in the 13th minute Ramona Bachmann found Kirby through the middle but the England international’s shot was turned away by Bardsley for a corner.

With Caroline Weir drifting in from the right and leaving space for Cuthbert and Kirby to exploit – much in the way Jess Carter (on the bench here) did to great effect in the first half of their league meeting here.

A rare City effort saw Parris collect a ball from over the top and, at a tight angle, the pacy forward squeezed a shot between an onrushing Berger and the near post but the ball slid across the face of goal and just wide.

City came out with purpose in the second half. A Stanway strike forcing a corner that Jen Beattie was able to get on the end of, but Chelsea scraped clear.

Again, Stanway threatened, latching on to a long ball but the Chelsea defence stood firm. With the back soaking up the pressure well Chelsea began to grow into the half.

Karen Carney looped a corner towards Eriksson but she could only dribble wide. With hesitancy the order of the day, it felt like only a moment of individual skill or a mistake would provide an opening.

With less than 20 minutes remaining Chelsea upped the pressure, a Cuthbert header bouncing off the bar before Kirby found herself through on the left but Houghton and Beattie recovered well and when Kirby turned and looked up the space was gone.

Then Cuthbert struck the inside the post and the ball trickled teasingly across goal and out for a corner.

City, perhaps sensing the good fortune of still being well in the tie, began to find some space in the middle. Stanway freed down the wing tested Berger, who saved at the second time of asking. Tessa Wullaert then had a shot blocked before Houghton had an effort deflected wide.

With extra time looking likely, City pounced. A Demi Strokes cross was whipped in and Eriksson could only agonisingly turn the ball into her own net.