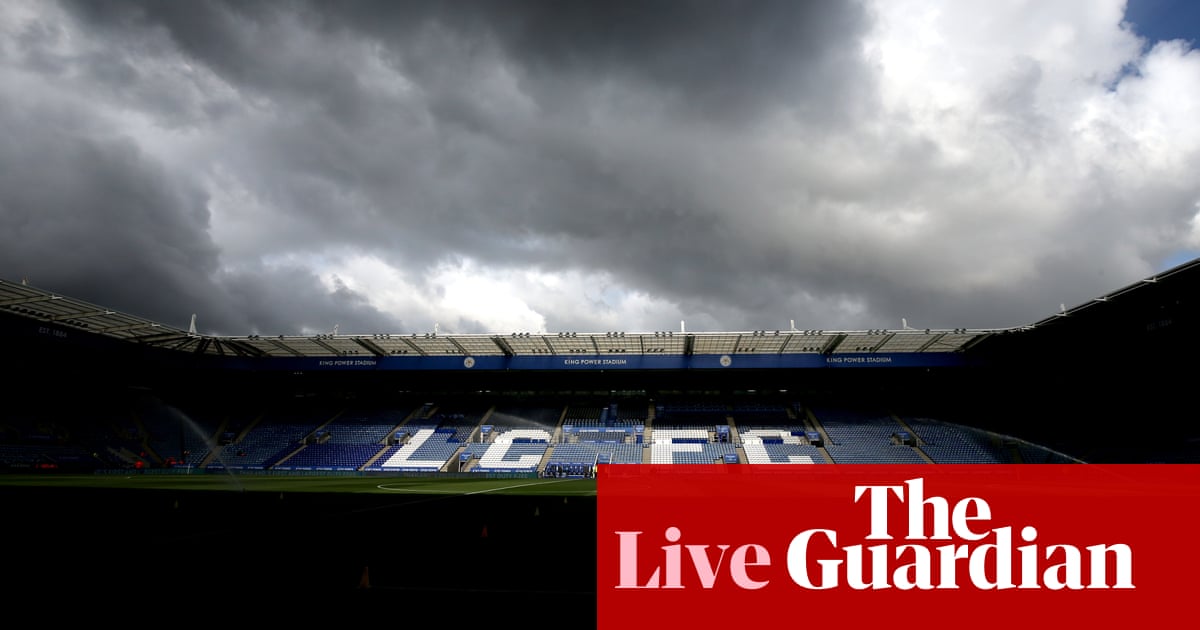 After a false start, Aubameyang and Lacazette kick-off for Arsenal.

The teams are in the tunnel at the King Power Stadium. Granit Xhaka, wearing the captain’s armband, gives Kasper Schmeichel a cuddle. Lacazette and Aubameyang trudge out on to the pitch.

Some tame pre-match soundbites. “I think it is not about the other teams – it is about us,” says Granit Xhaka, asked about the importance of victory. “If we win, we can be where we want. We have to win first and see after the result of other teams.” From the Leicester camp, Hamza Choudhury says: “Since the manager has come in, not only the results but the performances have been a lot better, playing with more intensity and stuff.” Brendan Rodgers adds: “We’ve just tried to make the team a little more aggressive, we have been working a lot on our pressing.”

“Nketiah was one of the few bright lights in Arsenal v Wolves,” emails Samuel Lawrence. Indeed, the young striker breathed life into a stale performance, his rawness and direct running causing problems for the final 20 minutes, by which point the game was already over. That was only Nketiah’s third appearance since January, when he was primed to join Augsburg on loan until Emery pulled the plug, while Championship clubs were queuing round the block to sign him. “The main thing for Eddie is that he stayed because he’s so important to Unai that he wants to keep him,” explained Freddie Ljungberg, Arsenal’s Under-23s coach.

Where’s Özil? Arsenal say the midfielder has a bruised foot, while Nacho Monreal is missing with a calf injury. As a result the Arsenal bench is not the most inspiring; they are not blessed with too many attacking options, the onus will be on highly-rated 19-year-olds Joe Willock and Eddie Nketiah should Unai Emery require intervention. But there are plenty of reasons to be cheerful, namely that Arsenal have never lost a Premier League game that has kicked off at midday. And Aubameyang, who has already plundered 24 goals and counting this season, is back.

Team news news: Mesut Özil is absent for Arsenal, who make three changes with Kolasinac, Mustafi and Aubameyang returning to the starting lineup. Emery appears to have opted for a 4-4-2, while Leicester tweak things with a single change from last time out: Hamza Choudhury replaces Demarai Gray. It remains to be seen where James Maddison pitches up, with Ndidi, Tielemans and Choudhury likely to make up a three-man midfield.

There is no time like the present for Arsenal, who surely require victory to give themselves a fighting chance of landing a top-four berth. With sixth-placed Manchester United duelling with third-placed Chelsea later this afternoon, Unai Emery’s side have the perfect chance capitalise and do their bit. With games against Brighton and Burnley to come, a flawless finish to the season is not impossible but they badly need to resurrect their shaky away form – they have won just twice on the road since November. They travel to Leicester in search of a first win in three matches after damaging consecutive defeats. “The first target is to recover our confidence,” Emery said. “We can build on this confidence each minute, each hour, each day, each week – and above all we’re training and we’re looking for a big performance for the three points.” The bad news for Emery is that Jamie Vardy will again lead the Leicester line, the striker who has been outstanding since Brendan Rodgers’s appointment and a regular thorn in Arsenal’s side having scored six goals in his past seven matches against them. Vardy has no doubt been rubbing his hands together at the prospect of giving a defence that collapsed in defeats to Crystal Palace and Wolves the runaround. Arsenal could be boosted by the return of striker Pierre-Emerick Aubameyang following sinus surgery.