Skip to content
You are here
Home > EltasZone > Champions League semi-finals: how the ties shape up and could be decided | Sachin Nakrani 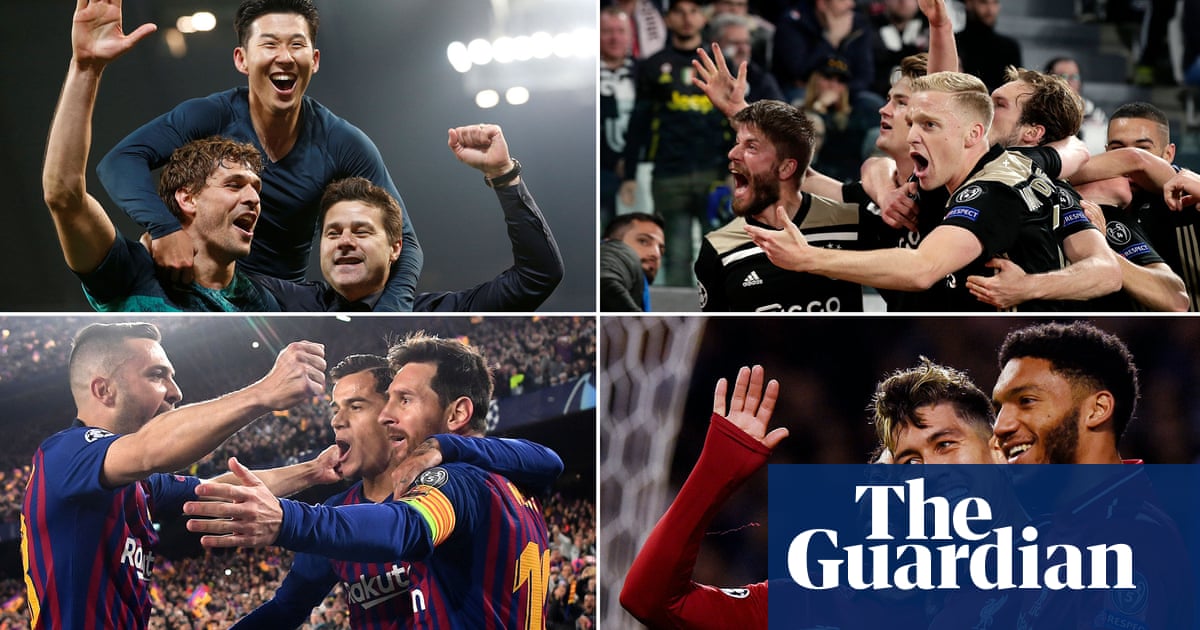 The tie that nobody expected. It should have been Manchester City v Juventus but then football – beautiful, wild, unpredictable football – happened and now we have a contest between two of the most exciting and dynamic teams in Europe. It promises to be a belter.

Pep Guardiola will be seen as a Champions League failure. But is it fair? | Jonathan Wilson

Perhaps the most fascinating aspect is that both sides will feel not only confident of winning but also that they are the favourites. Ajax have nothing to fear having knocked out Real Madrid and Juventus while Tottenham must surely believe anything is possible given their stunning success over City. So we could have a genuine toe-to-toe battle in which lightning fast attacks are exchanged at will.

Goals are guaranteed, as are some fascinating match-ups: Son Heung-min v Matthijs de Ligt (once Son has served his first-leg suspension), Danny Rose v Hakim Ziyech, Moussa Sissoko v Frenkie de Jong and Toby Alderweireld v the new and improved Dusan Tadic. It is fair to say whoever comes out on top in the majority of those battles will play a huge role in which of these clubs reaches the final.

One key dynamic is that Ajax play away first. This is a reverse of what happened against Real Madrid and Juventus and takes away their ability to bring a competitive result into the home of their opponents and crank up the anxieties with a fast and fearless approach. It could be a nervy night for Erik ten Hag’s men in Amsterdam if they need to overturn a deficit or hold on to a slender lead.

Spurs will want to travel to the Johan Cruyff Arena with an advantage and can take heart winning four of the five home games they have played in this season’s Champions League. History is also on Tottenham’s side: their only previous meeting with Ajax in a competitive European fixture came in the first round of the 1981-82 Cup Winners’ Cup and ended in a 6-1 aggregate victory for Keith Burkinshaw’s team.

A meeting between two teams who can legitimately refer to themselves as European royalty and who, on current form, are arguably the most formidable forces on the continent. Certainly their status as leaders of their respective divisions points in that direction, as does the players who will be on show.

Liverpool show resilience and sense of purpose in putting out Porto

Lionel Messi v Virgil van Dijk is a match-up that cannot help but make the mouth water, while Roberto Firmino v Gerard Piqué is not bad either. Then there is what could happen when Jordi Alba bombs upfield and leaves Mohamed Salah with a yawning stretch of grass to counterattack into. The consequences could be thrilling and devastating in equal measure.

Salah may score; Messi almost certainly will. The Argentinian is the Champions League’s top scorer with 10 goals and showed again in Tuesday’s victory over Manchester United there is no player in the world right now – and there probably never has been – who can turn a match so quickly and decisively. Those feet are mesmerising and Van Dijk, brilliant as he is, will have his work cut out.

The Dutchman will need his teammates’ help and in that sense Fabinho could be key. After a slow start, the Brazilian has excelled as a deep-lying midfielder because of a combination of excellent positioning, dynamic movement and wily strength. He will surely be tasked with monitoring and filling the pockets Messi drops into, and how well he performs could make a decisive difference to Liverpool’s fortunes.

There are others in Barcelona’s ranks who need to be watched, most notably Luis Suárez and Philippe Coutinho, both of whom will return to Anfield for a second leg that could end up ranking among the special European nights the stadium has hosted. What is for sure is this is a tie not to be missed and, most likely, whoever wins it will do the same in the final.

When is the 2019 Champions League final?

Atletico not in ‘crisis’ after Chelsea loss – Oblak