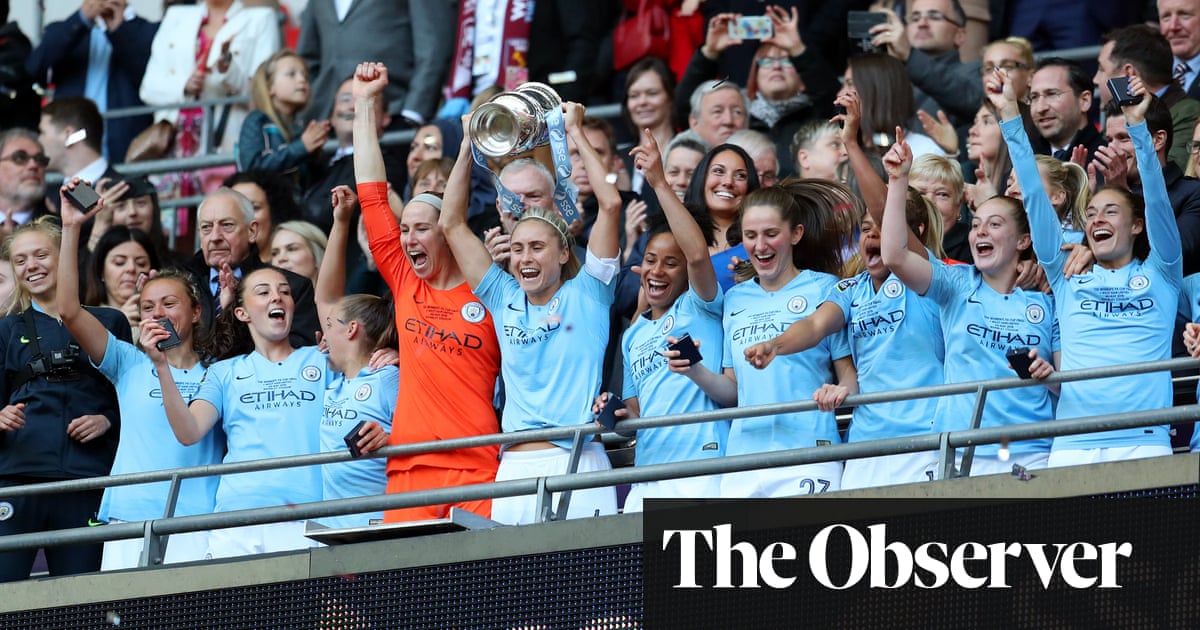 The Hammers, who only turned professional in the summer, took the game to the Women’s Super League runners-up in the first half. But a mistake from West Ham goalkeeper Anna Moorhouse, who took a step the wrong way as Keira Walsh struck from 25-yards, meant they were chasing the game and forced to leave gaps at the back. These were duly exploited by Georgia Stanway and Lauren Hemp as the clock ticked down and West Ham legs got heavy.

City instantly asserted their authority, exchanging the crisp patient passes that have been a trademark of their unbeaten domestic season. On four minutes they looked to have released the FWA Footballer of the Year, Nikita Parris, who slipped between the back two with ease only to be flagged offside.

Then it was the Hammers’ turn for a first foray forward. A long ball over the top found the former City forward Jane Ross, who weaved her way into the box from the left only for Jennifer Beattie to get across and clear.

Moments later Parris collected Caroline Weir’s pass from the right and raced into the box but a brilliant last-ditch tackle from the seven-time FA Cup winner Gilly Flaherty halted her in her tracks.

With the crowd clearly behind West Ham, despite the clash with the men’s fixture, and “Come on you Irons” ringing round the stadium, the players in claret were making their presence known to a frustrated City. And, while City gradually began to peg their opponents back, the Londoners looked the hungrier side.

First Cho So-hyun slipped a ball towards Alisha Lehmann but the 20-year-old misread the pass and City cleared. Then Ross again found space on the left. With Weir and Tess Wullaert caught out of position, she glided into the box and tried to force a corner off Steph Houghton but Karen Bardsley was there to collect.

With Stanway – who shared a photo of her younger self queuing for a photo with now teammate Houghton at the 2013 final in the buildup to this match – kept quiet, outmuscled by a steely Hammers back line, Parris remained City’s greatest weapon. Fed the ball on the edge of the area, she took a touch, looked for an opening, but a West Ham defender dived in front of her shot. Walsh collected the loose ball but was clattered to the ground by Flaherty.

With half an hour gone, West Ham had the best chance of the half. Erin Simon’s whipped cross from the right was steered beautifully between the City centre-backs, and Ross’s downward header was goalbound but Bardsley made a superb save to push the effort wide of the post.

With the crowd buoyed by the agonisingly close call West Ham pushed forward again. Lehmann’s slow goal-ward strike flicked off the head off an offside Brooke Hendrix and wide.

After the break an irritated City looked to regain the momentum. Jill Scott skipped past a challenge before gathering herself and popping the ball to Weir, who, in acres of space, skied a brilliant opportunity into the crowd.

Up the other end, Lehmann whipped a ball across goal from the left but there was no one at the far post to take advantage. The previously quiet Stanway took advantage of a rare break and squared to Walsh in the middle but her shot was watched past the post by Moorhouse.

Walsh was not about to make the same mistake twice, though, and with 52 minutes gone she danced past Kate Longhurst and her 25-yard shot bounced past the terribly wrong-footed keeper.

Looking to turn the screw City flooded forward again, but Stanway’s cross floated uncharacteristically behind. Abbie McManus then looked to play in Stanway, Moorhouse seemed to collect but instead slipped and Stanway was able to recover, only for Flaherty to nip the ball away.

Parris, this time beating the offside trap, raced through and tried to chip Moorhouse but the keeper made a diving backward save to push the ball wide. West Ham’s best chance to level then came on the break with Leanne Kiernan squaring selflessly to Lehmann but the pass was poor and the Swiss forward’s shot thudded into Bardsley’s arms.

In the 80th minute City had their second. Stanway swerved past Brooke Hendrix and Flaherty with ease before powering a low shot inside Moorhouse’s far post.

The icing on the cake was added by Hemp with almost her first touch after coming on, and Moorhouse was again at fault, racing out of her box the stranded keeper was punished by the 18-year-old who fired past her into the empty net. It was a cruel end to the West Ham fairytale.

Tweets of the Week: Social distancing with Sam Bennett, Alice Jackson’s tribute, and how does the Tour de France work?

Lionel Messi has extended his feud with Barcelona’s hierarchy by openly criticising the way in which the club treated Luis Suárez following his departure to Atlético Madrid, claiming his former