Few players have dominated a tournament like John Isner has the BB&T Atlanta Open. The American has won five titles at the ATP 250 tournament and reached the final in eight of nine appearances. But he doesn’t feel any pressure to keep that up this year.

“I think I felt more pressure if maybe I won the tournament two or three times, maybe trying to win it four. And I think now, I’ve won it five times, but that’s a lot, so winning six would be awesome, but if I don’t win it a sixth time this year, that’s okay, too,” Isner said. “I’ve still won the tournament five times… after maybe I won it the first time, or after I lost in the finals the first two years, then maybe I’ll feel some pressure to win it. But not so much right now.”

Isner advanced to the Miami Open presented by Itau final in March after lifting his first ATP Masters 1000 at that event last year. But while playing Roger Federer in that championship match, the American hurt his left foot, ultimately learning that he broke it.

The 34-year-old returned at Wimbledon, where he made the second round. He took a wild card into the Hall of Fame Open in Newport, where he claimed his fourth title. It was even more special because it was Isner’s first title with his daughter, Hunter Grace, in the crowd.

“That was cool. That was actually something I wasn’t even thinking about at all during the course of the match. Thankfully I wasn’t getting ahead of myself, but then when it came time to do the ceremony, I looked at where my wife was sitting. She wasn’t there,” Isner said. “She had gone and got Hunter Grace and brought her over to the side of the court. She was smart enough to go get her and knew that would be a good moment to capture. So that was the highlight of the week, no doubt.”

Three of Isner’s victories came in three sets, with hot and humid conditions making it tough for the players on the grass throughout the week. But having his daughter there made the hard work well worth it.

“After being able to sit down for five minutes straight with an ice towel, I put the ice towel on even after the match was over, so I was very happy the match was over and at that point I was just ecstatic that she got to come out,” Isner said. “She has no idea what was going of course, but in a few years, she’ll be able to look over those pictures and smile.” 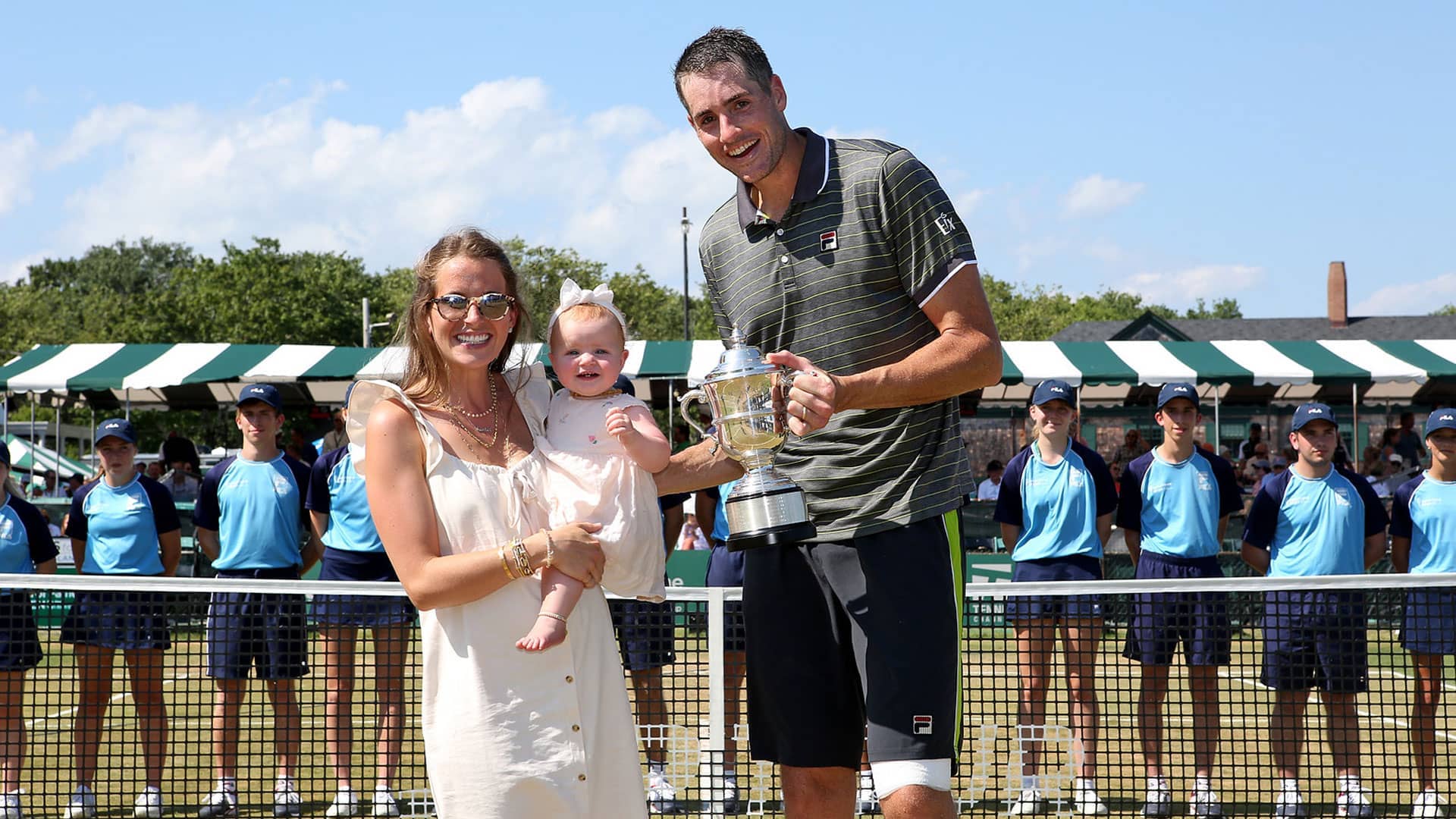 Photo Credit: Kate Lucey/International Tennis Hall of Fame
In Newport, the ball bounces low on the grass, whereas players have said the Atlanta courts are bouncy. But Isner is not concerned with the quick surface change as he looks to do the Newport-Atlanta title double for the second time.

“I actually don’t think it’s that big of a transition at all. I think if anything it can help. You go from grass where you can occasionally get some tricky bounces to a very pure hard court. I think it makes it pretty easy,” Isner said. “I’m not going to be spending my offseason practising up there or anything, but… I don’t think the transition is that difficult at all.”

Isner will begin his campaign against reigning New York Open champion Reilly Opelka, who owns a 2-1 lead in their budding FedEx ATP Head2Head rivalry. In the 10 sets the Americans have played, eight have gone to tie-breaks.

“It’s going to be very tough,” Isner said. “It could be an actual coin flip… we both serve really well and we both like surfaces like this. So I’m fully aware that I have an extremely tough first match here in my second round.”

Melo On Making Brazilian History At Roland Garros: ‘I Was On Another Planet’

Murray Brothers Could Meet In Wimbledon Doubles Third Round