There is little doubt that sports are a form of theatre. Take a seat at your favourite event on the ATP Tour and the entertainment value is unmatched.

As players fight for their careers, with all the glory, prize money and coveted ATP Rankings points at stake, it’s a dramatic performance in its purest form. But, while the professional tennis landscape is akin to a big theatre, it is rarely staged in one.

In the 1600s, actual tennis theatres were rather prevalent. Wooden indoor courts throughout western Europe were often converted into playhouses for various theatrical productions. In fact, with space limited, the earliest theatres in Paris were commonly placed in existing structures like tennis courts.

Today, travel an hour and a half south of the French capital and you’ll arrive at the 21st century version of tennis theatre: the Palais des Sports in the town of Orleans. With a capacity of 3,000 people, the arena is home to the Open d’Orleans on the ATP Challenger Tour. 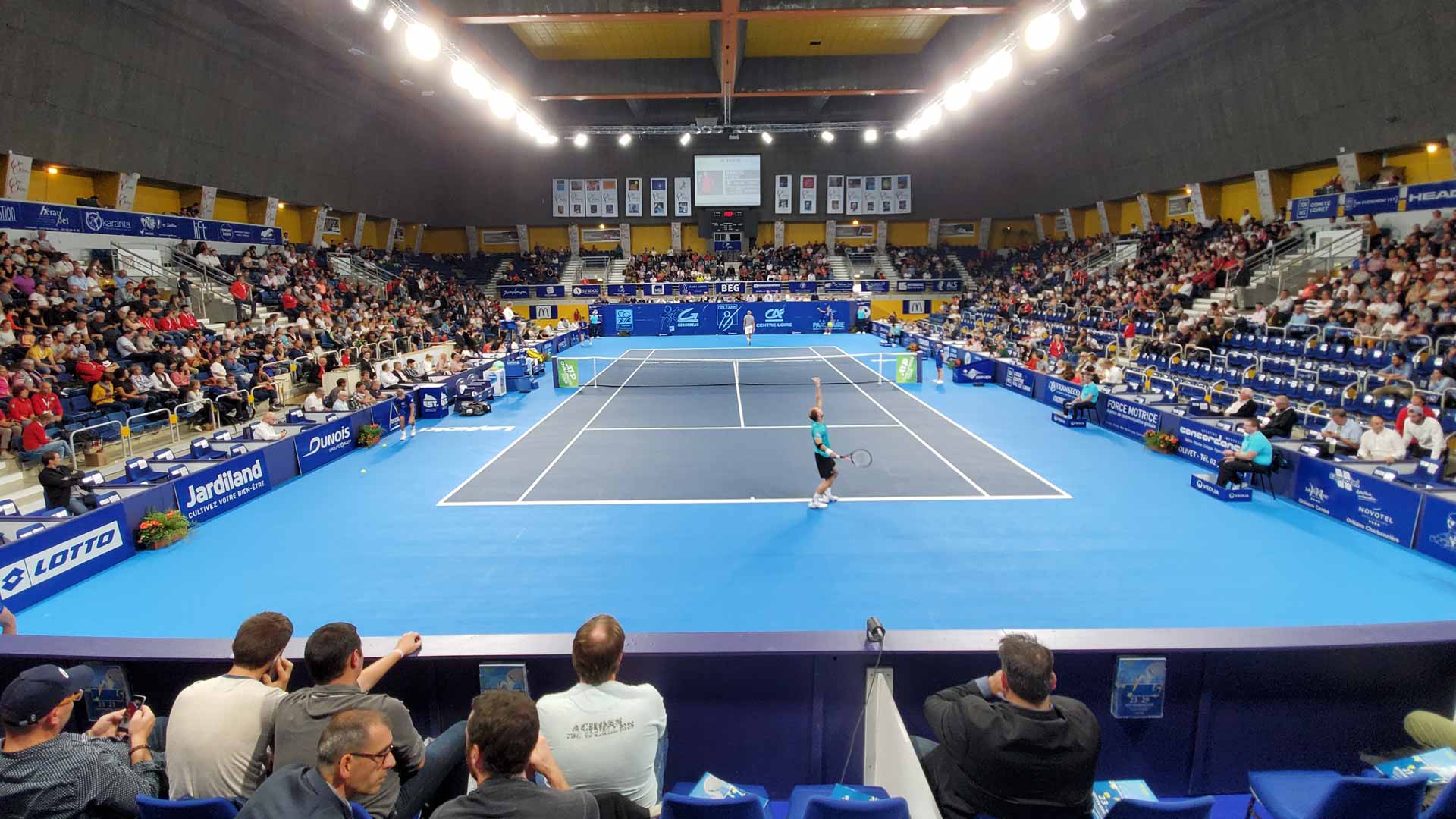 On the Challenger circuit, the top events are ones that create a first-rate fan experience in a festive atmosphere. For many tournaments, this involves nightly entertainment, including concerts and comedy shows. In Orleans, they take this to the next level.

Enter the Palais des Sports and you’re instantly transported to a different time. The venue was built in the 1970s and that same vintage charm has been maintained over the years. It provides a unique layer of authenticity, as white-gloved ushers with their felt-covered hats greet you at the front entrance, swinging open the double doors.

It’s not quite a scene from The Great Gatsby, but it’s not far from it. As you stand in the main lobby, swing to the left and you’ll find a small lounge adorned with velvet curtains, wooden stools and large kegs used as tables. In the corner is a small bar stocked with the finest French wines and champagne. Caviar, black olive tapenade and pâté en croûte are whisked from table to table and to the adjacent, larger room which includes leather couches and chairs.

And that’s just the first stop on our tour. On the opposite side of the lobby you’ll find the entrance to the building’s three-story staircase. Lined with dramatic black-and-white photos from tournaments past, including a screaming Grigor Dimitrov, a sobbing Nicolas Mahut and a euphoric David Goffin, the stairs are covered in narrow red carpeting and sandwiched by high wooden railings. A candelabra sits elegantly on one side.

Welcome to the Palais des Sports in Orleans 🇨🇵

As you continue the ascent towards the players’ lounge on the top floor, you’ll pass by the venue’s premier restaurant. Tournament director Didier Gerard ensures that his showcase matches are not only held at night, but during lunchtime as well. Patrons arrive midday to socialize with friends and for meetings with clients, dine in the restaurant and step onto Court Central for a marquee showdown. And as day turns to dusk, they stroll down the red carpet that lines the sidewalk to the Open Space lounge, where more bottles of rosé and crystal flow deep into the night.

It’s a playground for high society on the ATP Challenger Tour.

But the most opulent restaurants and lounges are nothing without an elite chef. French gastronomy is listed as a UNESCO World Heritage item and Gerard’s goal from the very first edition was to integrate this into the success of his event. Every day, a different renowned chef cooks for the tournaments patrons.

The most famous is undoubtedly Bernard Vaussion, the Executive Chef for the President of France from 2004 to 2013. He served under Jacques Chirac, Nicolas Sarkozy and Francois Hollande, before retiring six years ago. Also, two chefs of Michelin-star restaurants made appearances, with Nicolas Sale cooking on Monday and Martin Simonart on Thursday. In total, nearly 4,000 meals were served during the week. 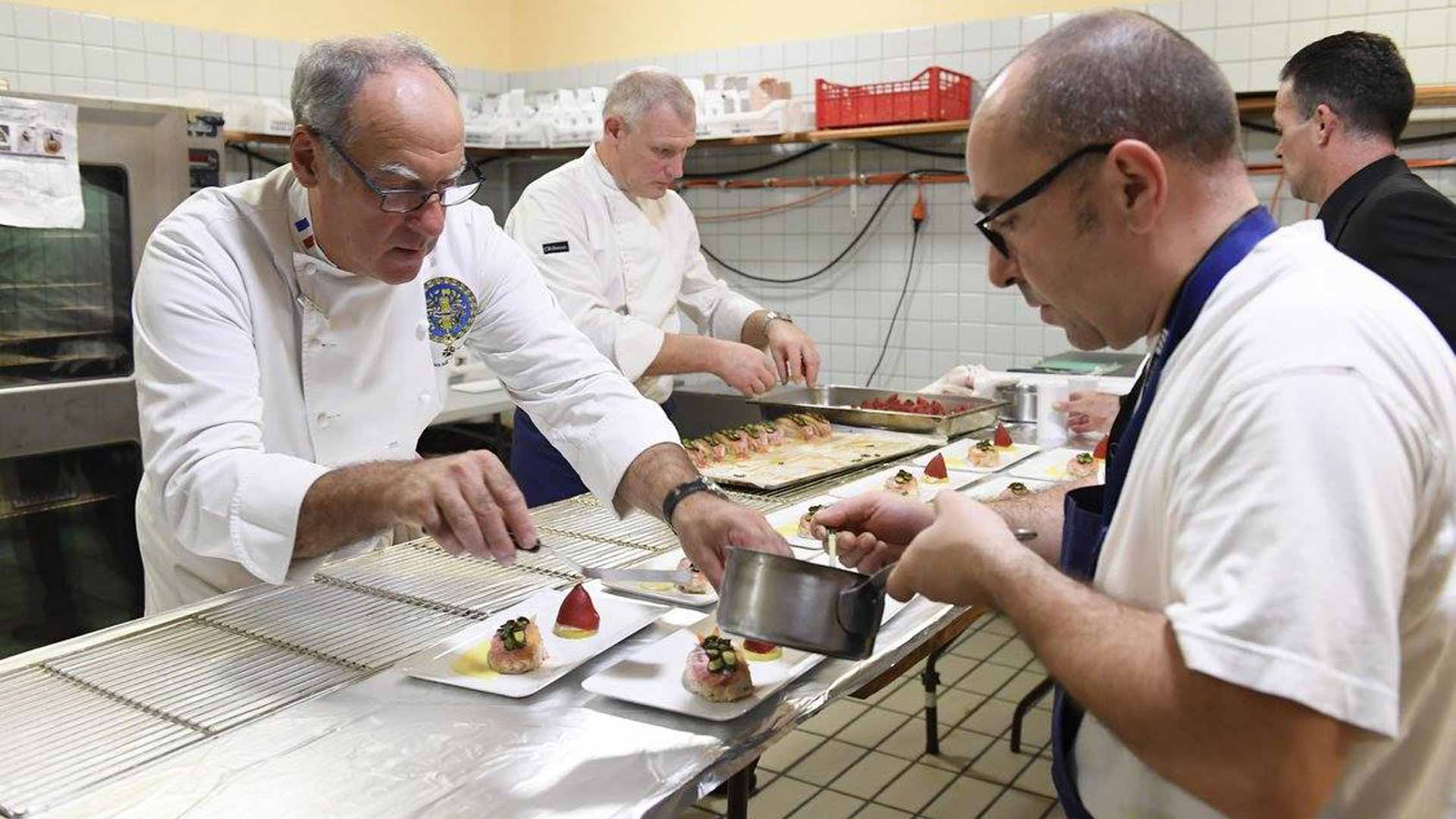 “It is always a pleasure to be here,” said Vaussion. “I help oversee all the restaurants throughout the week and how they operate. When they approached me to first do this, I wasn’t sure, but over time I have come to look forward to this week. It’s a great experience.” 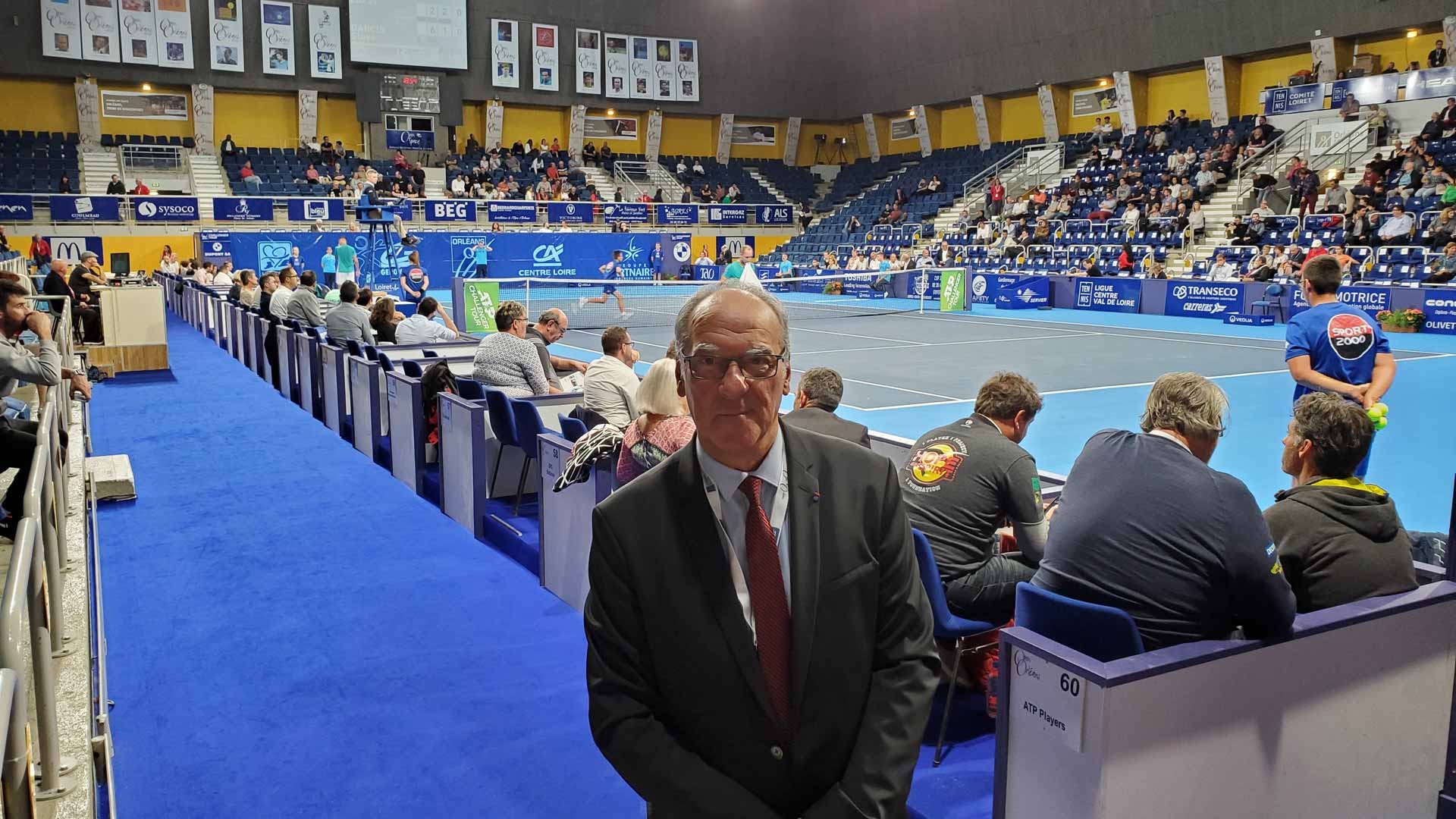 The Palais des Sports, which was built on the former site of a World War II military prison, today houses an Olympic sized swimming pool, a large multi-purpose hall and 12 other rooms dedicated to various sports, including martial arts, boxing and table tennis.

And between the lines, the drama is just as palpable. Loud, theatrical music accompanies each Hawkeye challenge and the stadium lights flicker on set point, as neon winks dance from the rafters to the mezzanine. The crowd is drenched in darkness as players are dramatically announced for their walk-ons and the lights are dimmed for changeovers.

The tournament isn’t only a favourite among fans. Gerard makes sure the players are treated well too, not only implementing Hawkeye on Court Central, but providing a hairdresser free of charge throughout the week. And arguably the most unique aspect of the tournament is the trophy awarded to the singles champion. In fact, it’s not a trophy at all.

For all 15 editions, Gerard has hired a different artist to produce a painting for the winner. He noted that all the trophies he had won in his career were tucked away in his garage. Determined to make sure his event wouldn’t be forgotten by its champions, he established his own tradition. In addition, a replica of each painting is hung on the walls of the Open Space restaurant, ensuring the heritage of the tournament is preserved over time. 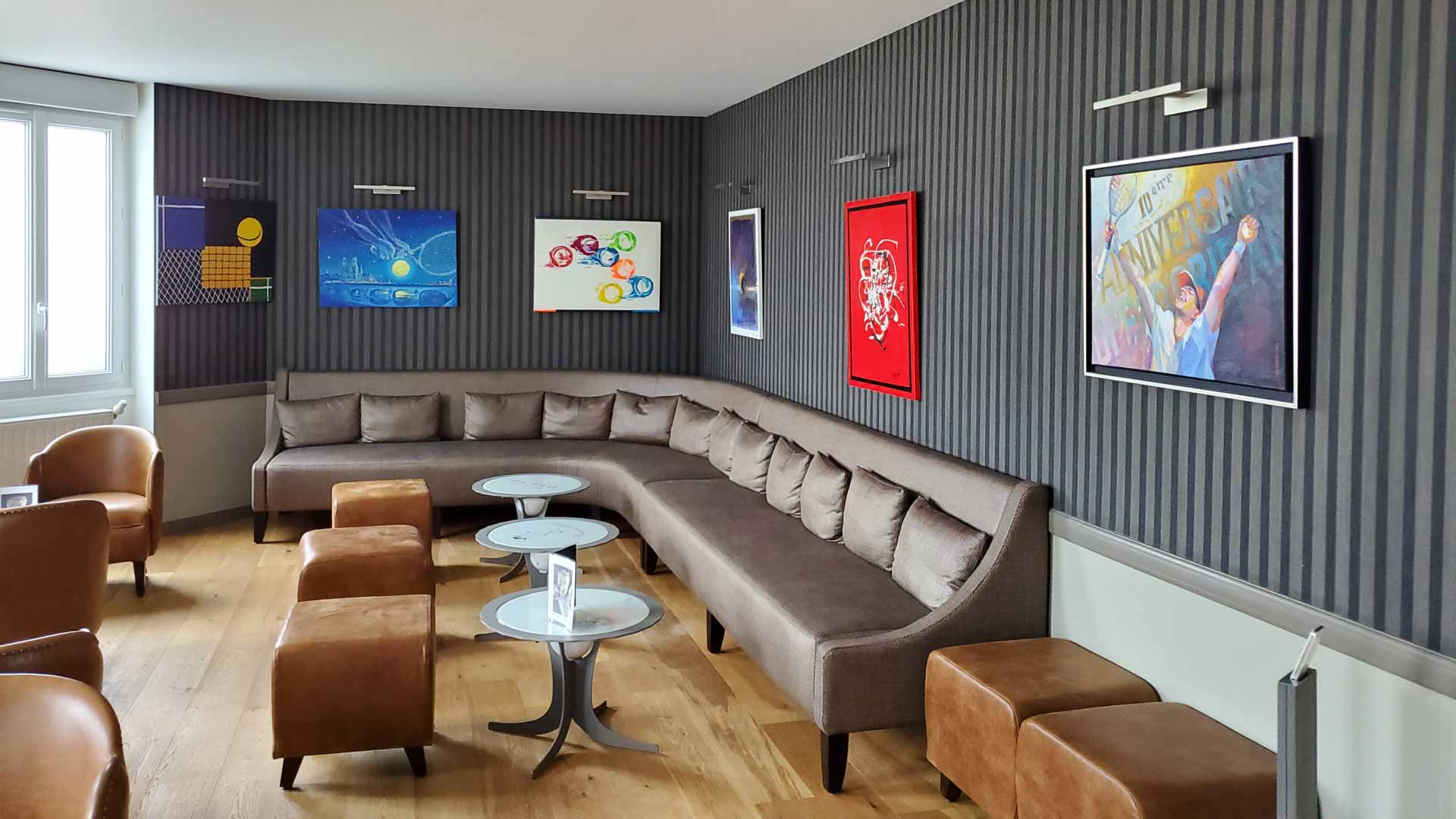 This year, Gerard called on the talents of young Parisian artist Oji. His painting depicts a blue tennis court on the banks of the Loire River in Orleans, with a heron standing over a few balls. Oji wanted to use the colors of the court – sky blue and navy blue – to evoke the sky and the banks of the river. He preferred to depict the city by its natural habitat rather than its typical landmarks, the Cathedral and Joan of Arc statue. 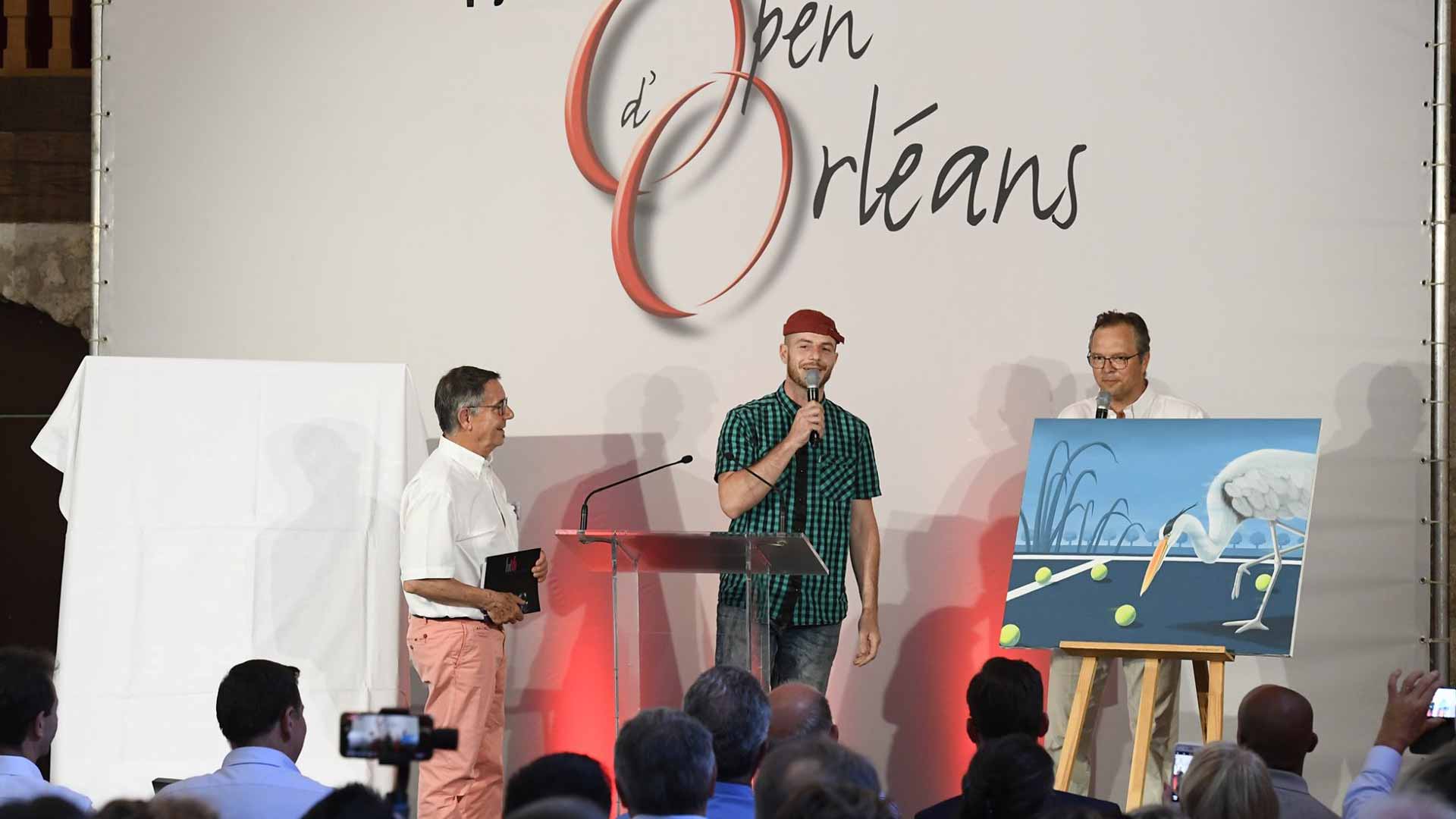 Norbert Gombos, titlist in 2017, was excited to receive his painting. “When I saw the posters throughout the city with the image of the painting, I was thinking how much I wanted to have it. Then I won the tournament, so it was really nice. I framed it and hung it over my bed, so every day I wake up and see the trophy. Nice memories come from that.” 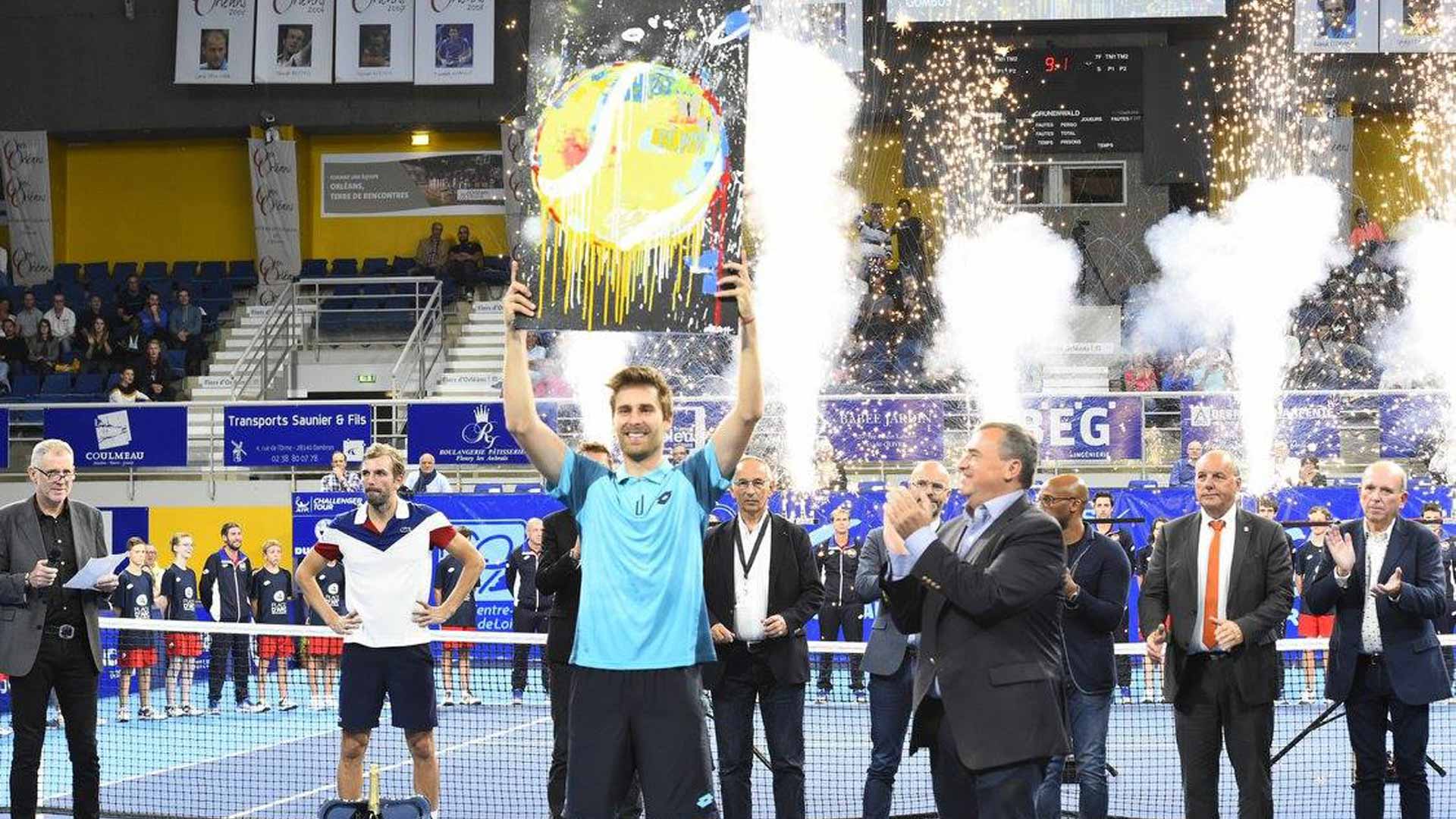 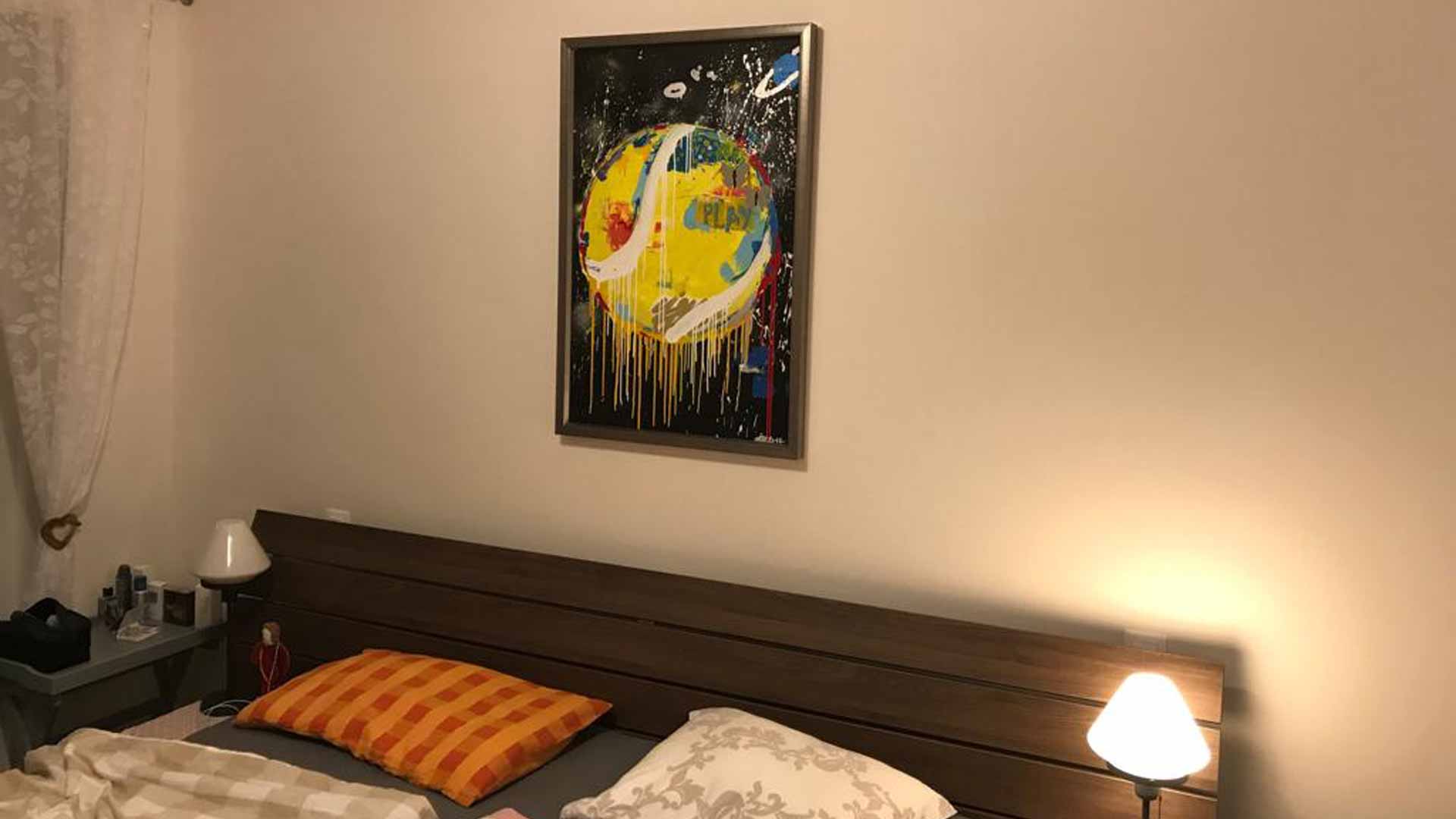 “It’s definitely unique,” said 2014 champion Sergiy Stakhovsky. “You always have the cups and trophies, but a painting is pretty special. You can hang it on the wall and it’s something different. You don’t feel like it’s a trophy. It’s a part of your home design now and people don’t know that it’s a trophy when they walk in. There’s a story behind it. Mine is a player raising his arms and it says ’10th edition’ on it. It’s very nice.”

In addition, the event has paid tribute to the legacy of French tennis in bringing Sebastien Grosjean and Nicolas Escude as tournament ambassadors. The former World No. 4 Grosjean and No. 17 Escude return every year to lend a hand and support the tournament.

“The tournament director Didier approached me to help with the players and the sponsors,” said Grosjean. “He’s a close friend and it’s important for me to stay close to French tennis and improve the tournament. I love the game, so it’s natural for me.

“Many years ago we had Dimitrov here and now it’s guys like Ugo Humbert and Jannik Sinner, so you always see the next generation in Challengers. Orleans is one of the biggest tournaments on this tour, maybe the biggest indoor event. It’s great to see all the new players coming up. This is a great platform.”

Nadal Leads Spain To The Semis As Djokovic & Serbia Fall