The SEC said in a statement that the Arkansas-Missouri game was postponed due to a combination of positive tests, contact tracing and subsequent quarantining of individuals within the Arkansas football program, consistent with SEC COVID-19 management requirements.

The Vanderbilt-Missouri game is a rescheduling of a game postponed on Oct. 17. The game will be played at noon ET Saturday and televised by the SEC Network. Missouri also had its Nov. 14 game against Georgia postponed.

The Tennessee-Vanderbilt game was postponed for the purpose of facilitating the rescheduling of the Vanderbilt-Missouri game, according to the SEC. It’s the second time in three weeks that Tennessee has had a game postponed. Tennessee’s Nov. 14 home game against Texas A&M was postponed due to COVID-19/contract tracing issues in the Aggies’ program and rescheduled for Dec. 12.

“As we continue to adapt to current realities, it’s important to remain flexible as we move forward in the final weeks of the season,” SEC commissioner Greg Sankey said. “Contact tracing continues to be the biggest contributing factor to game interruptions. We will continue to manage the remaining weeks of the football schedule to allow for as many games to be played as possible.”

Sankey had said previously that league officials were exploring the possibility of playing makeup games on Dec. 19, the day of the SEC championship game, with teams that don’t involve the division champions.

The SEC on Monday said the opportunity to reschedule the Arkansas-Missouri and Tennessee-Vanderbilt games would be evaluated and noted that the rescheduling of games on the remaining SEC schedule would include Dec. 19 as a playing date.

WATCH: C.J. Wilson Strikes Out the Side in the 4th Inning | Rangers CLASSICS 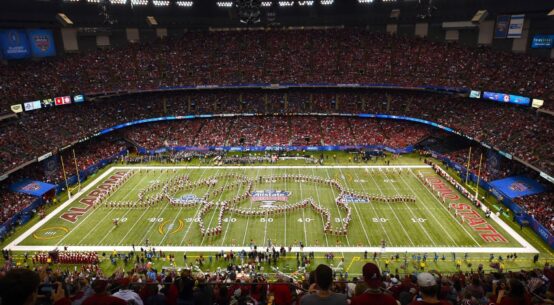 Elephant in the room: Tide big favorites vs. OSU