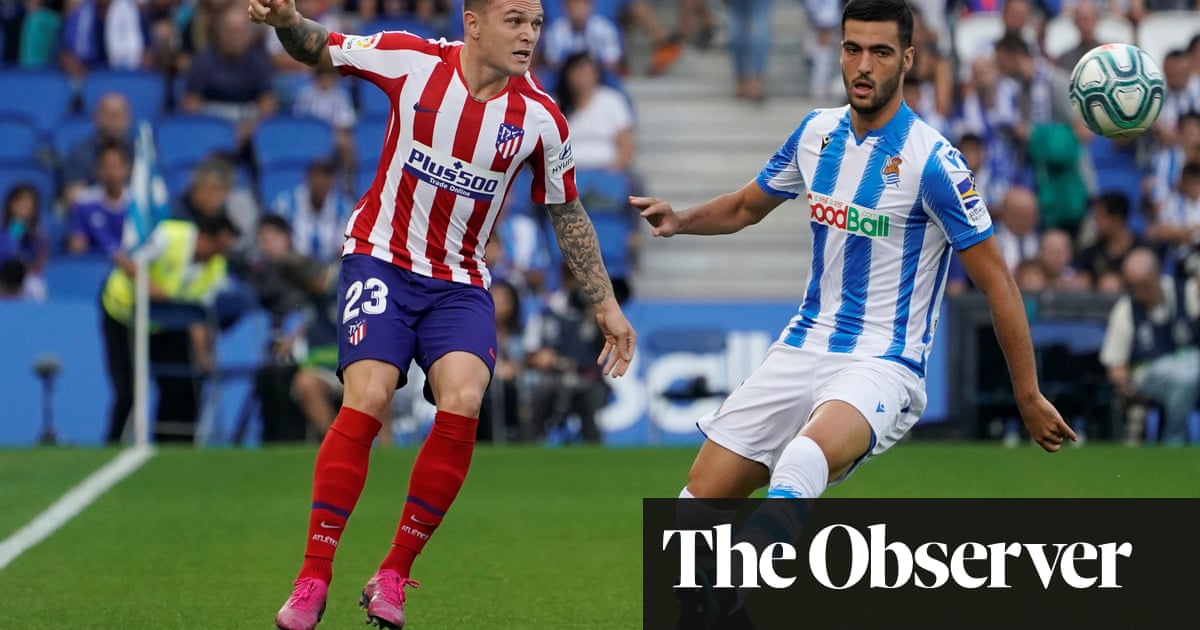 A few months ago, Kieran Trippier was mingling in the stands of the Wanda Metropolitano. It was the end of the Champions League final and Liverpool had claimed the trophy, but Trippier seemed reluctant to leave the field, lingering at the side of the pitch and commiserating with stricken Spurs fans. It was, many observers felt, his way of saying goodbye.

On Wednesday the Champions League anthem will be playing at the Metropolitano once more and Trippier will be there again. It turned out that the 28-year-old was performing some kind of farewell, although recently the course of events that led him to become an Atlético player have come up for debate. One thing is for sure, though: despite the short period Trippier has been in Spain, he has already made an impression.

The former Burnley player has so far been an ever-present in an extensively remodelled Atlético side. Performing at full-back and wing-back he has been used as an offensive weapon by Diego Simeone and – alongside his fellow new signing Renan Lodi on the left – is one of the club’s leaders in crosses and key passes per game. Perhaps not surprisingly his deliveries have been compared to David Beckham’s by the local media. Next he will likely be given the responsibility of subduing Cristiano Ronaldo as Atlético reprise their rivalry with Juventus in Europe.

In March, Juve overturned a 2-0 first leg deficit to blow past Atlético 3-2 in the last 16. This season they kick off the competition paired against each other in Group D, alongside Bayer Leverkusen and Lokomotiv Moscow.

“We know it’s going to be big game,” Trippier says. “Atlético and Juve have played each other over the last couple of years. The preparations have all got to be right, you have to be spot-on against a top-quality side. But we go into the game to win it.”

Trippier has come up against Ronaldo before, when the Portuguese superstar was a Real Madrid player and Spurs produced an eye-catching 3-1 group stage win at Wembley (Trippier provided the assist for Dele Alli’s opening goal).

“You want to play against the best players in the world and Ronaldo’s record is there to see for everyone”, says Trippier. “He’s one of the greatest ever. But it’s not just Ronaldo, there are 10 other quality players there.”

As for the Metropolitano, Trippier’s experience of the atmosphere at the 68,000-capacity ground makes him confident it can be an asset. “The stadium is incredible, I noticed that already from the final, and that was with two different teams,” he says. “When I played my first La Liga game the fans were incredible. The passion was intense, it was vocal for the full 90 minutes.

“When we went 2-0 down the other day [against Eibar, before coming back to win 3-2] they were still leading us on. The atmosphere is fierce.”

While Trippier was away on England duty, conflicting accounts emerged about his departure from Tottenham. Trippier suggested that the chairman, Daniel Levy, and Mauricio Pochettino had given him the impression he was not wanted. His former manager has disputed that account and pointed to Trippier’s selection in the Champions League final as evidence he was valued.

Whatever the truth, there is no doubt Trippier has embraced his new adventure. He is learning the language and relishing the development of his game that comes from working with Simeone.

“It all starts with the manager,” he says. “He sets the example, he sets the tone and we just feed off him. Every single minute of training is very demanding. The two months I have been [in Madrid] I have learned so much already, as an individual and as part of a group. I am looking forward to working with him for many years.

“I was willing to learn a different language, and a different style, and there’s a different culture for my kids and wife. It was a big decision for them also, I had to think about them. And it’s something we are all looking forward to. I am ready for that next challenge and chapter in our lives.”

‘My gut is Kane can be fit’ for Champions League final, says Mauricio Pochettino

NFL Week 2 grades: Tom Brady and Buccaneers get ‘B+’, Raiders get an ‘A+’ for winning first game in Las Vegas

This year the Premier League posted a video compilation of the fastest goals from kick-off. They were all scored within seconds of the game starting, ignoring the mid-match instant post-kick-off