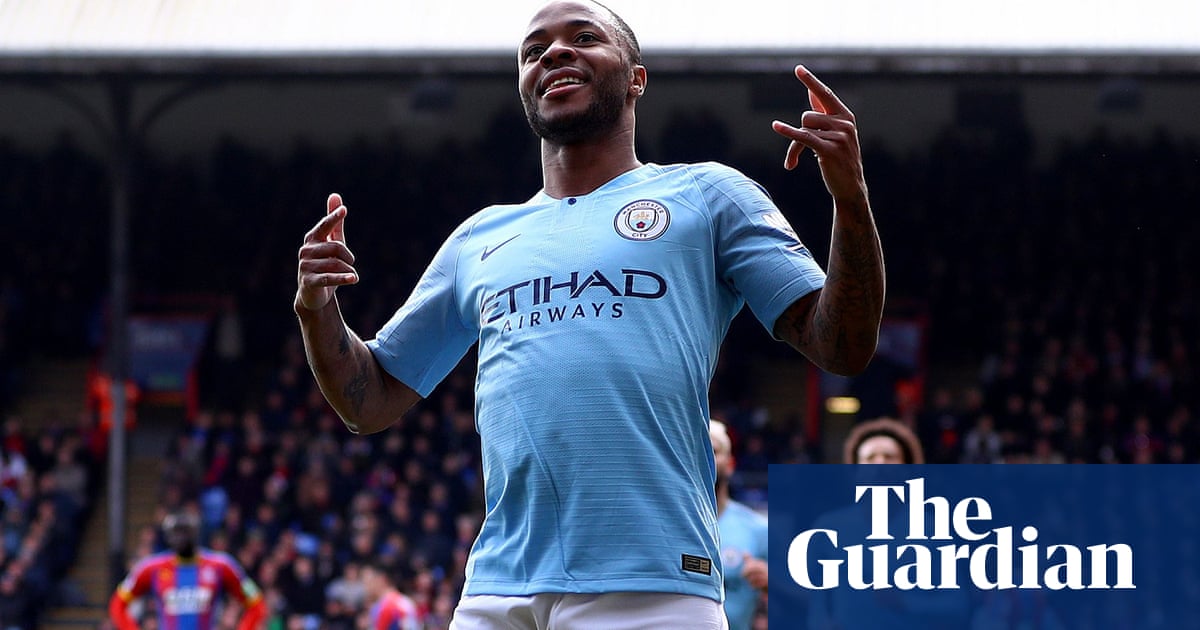 There has been a vague sense in the past few weeks that the Premier League is giving way to Manchester City, that as the two leading teams chase down the final curve – knees pumping, arms chopping the air – it is City who seem to be running through a lighter gravity. Some have suggested there is a kind of Gruffalo effect here, the children’s story of the very clever mouse who managed to scare away the rest of the forest just by walking along with a monster behind it.

Fear of calamitous defeat, helplessness in the face of City’s domination of the ball: the argument goes that City’s aura has drawn the sting from teams outside the top six, who save their fight for those around them, those who actually appear to be playing the same game.

There was an element of pre-intimidation at Selhurst Park. City were excellent value for a steamrollering 3-1 win that put them, briefly, back on top of the table. Raheem Sterling was, with one exception, sharp when it mattered in front of goal. But Crystal Palace were also maniacally cautious, allowing City the time and the space to find their passing rhythms early on.

But then, what else could they have done? This kind of fear factor is earned rather than given for free. If your opponents think you are dangerously good, it is often a sign that you are. And City were good in that familiar kind of way. The league has known dominance in the past but never quite in this same style, where the ball is simply removed from your grasp, the game skewed entirely one way.

It has made for a frictionless winning run. Since the defeat at Newcastle, City have won nine league games in a row, five of those 1-0 or 2-0, six with a clean sheet, every game spent passing rather than chasing the ball.

With five minutes gone this game had already found its pattern. City play neck-crick football these days, the ball funnelled with wonderful precision between the same colour shirts at the same end, while the opposition pant and gasp and cover.

For a while in the first half a kind of glaze hung over this south London Sunday lunchtime, the air seeming to thicken, a sickly sun gleaming off the lime-green turf. On his touchline Roy Hodgson stood completely motionless for at least five minutes. Time and again the light blue shapes chugged from left to right, the ball fizzed and curved and nudged between them. By half-time City had taken 78% possession and made 334 accurate passes to Palace’s 71. Aaron Wan-Bissaka had a good game but it took him 37 minutes to complete his first pass – a reflection of the way his role had been reduced to chasing and harrying.

Could Hodgson have done anything differently? Afterwards he shrugged and pointed out the gulf between the two teams. But the fact is Palace had no plan B here at 1-0 down other than trying stop themselves going 2-0 down.

City’s first real chance came down the right, Leroy Sané and David Silva working the ball to the feet of Sterling, unmarked 10 metres out. Somehow he missed, shanking a horrible low shot past the post and drawing a tactful, slightly stunned silence from the Holmesdale Road end.

No matter. Five minutes later there was silence again but this time Sterling was turning to celebrate. The goal came from a Palace set piece, humped high into the box at the other end. Four touches later it was 1-0, a goal made by a single pass from Kevin De Bruyne, who slid the ball through the Palace cover like an expert crown green bowler taking a moment, sucking on his pipe, then curving his orb through the wreckage to take the jack. Sterling lifted the ball into the far corner with elan. He continues to lead this team from the front.

Sterling’s second goal arrived just after the hour, a neat low finish from Sané’s cross. With nine minutes left Luka Milivojevic spanked a low free-kick through the City wall and for a moment the game opened up, just long enough for City to do what Hodgson always feared they might, breaking once again for Gabriel Jesus to score right at the finish.

A victory born out of fear, out of walking along with a monster behind you? This is unfair on City, who really are that good. It also overlooks the way Pep Guardiola has made changes since that spell around the turn of the year when his team looked vulnerable. There was a sense that the full-backs had become cavalier, that a quick transition into the space behind could cut City open.

But they have tightened since then, have become more miserly. Often Guardiola has played two dedicated central midfielders. City have blotted their opponents out with the old Pep Principle No1: that possession is also the best way of bolting the door.

As they prepare for three games that might just decide their season, that feeling of running through slightly thinner air has been hard earned; just as here it was more than enough.