One of the benefits of selecting an abstract football team is that you can do so safe in the knowledge the players concerned will almost certainly never line up, face actual opposition and get hammered in a state of affairs that would go a long way towards proving just how difficult life as a manager can be.

In picking the Premier League team of the season so far, from a topsy-turvy and often chaotic campaign played behind closed doors, the main difficulties did not so much centre around who to include, but who to leave out given the ridiculous stiffness of the competition for places in almost every area.

While readers are entitled to disagree with the team detailed below and many almost certainly will, sometimes in the strongest possible terms even though the whole wheeze is purely a matter of unprovable opinion, it behoves me at least to point out that as somebody with no skin in any particular Premier League club’s game, this selection was based almost entirely on the evidence of my own eyes rather than any particular allegiance, with the occasional fall-back to statistical evidence when otherwise unable to choose between two or more players for any one particular role.

It is probably also worth mentioning that even the most impartial of managers can be capable of occasional mean-spiritedness, so despite the recent canonisation of a certain Aston Villa midfielder as the patron saint of England Midfielders, he has not been afforded a berth in this squad for the churlish reason that I am Irish and justifiably concerned that, for all his virtuoso talents, if picked the player in question might decide he’d rather play for somebody else’s made-up team instead. See also: Rice, Declan.

Goalkeeper: Karl Darlow (Newcastle) While unlikely to feature prominently in the already animated “England goalkeeper at Euro 2020” conversation, Darlow is quietly and unfussily staking a claim while deputising for the injured Martin Dubravka. Newcastle’s passive approach ensures the 30-year-old is kept busy and he has produced a string of impressive, error-free performances. 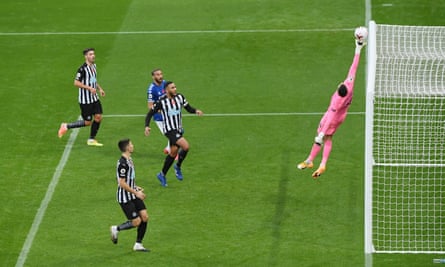 Karl Darlow denies Everton a goal in the game at Newcastle this month. Photograph: Michael Regan/Reuters

Right-back: Reece James (Chelsea) At 20 he is not the finished article but given his defensive solidity and threat going forward it is no surprise he has cemented his place in Chelsea’s lineup. But for wayward finishing by the front men, his lethal crossing would have earned him more than one tick in the assist column.

Centre-back: Conor Coady (Wolves) Adaptable, authoritative and an organiser who is outstanding in his deep-lying role in the centre of Wolves’ back three, the likable Liverpudlian is second to none in the Premier League when it comes to playing long, accurate passes out of defence and is increasingly making a case that he should be an automatic starter for England.

Centre-back: Wesley Fofana (Leicester) A £32m acquisition from Saint-Étienne, the 19-year-old has been a revelation. Fast and aggressive, his astute reading of the game belies his tender years and a couple of interceptions against Wolves were key in sending his team top before this international break.

Left-back: Lucas Digne (Everton) Notwithstanding the red card and ban – reduced on appeal – he received for accidentally surfing the ankle of Kyle Walker-Peters, Digne has barely put a foot wrong. Defensively sound he has chipped in with two assists in seven games as he continues to flourish under Carlo Ancelotti. 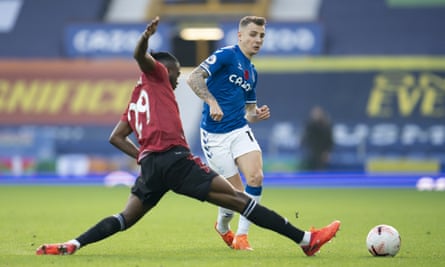 Defensive midfielder: Kalvin Phillips (Leeds) Leeds born and bred, this deep-lying playmaker is arguably the most important player in Marcelo Bielsa’s exciting side and it is no coincidence they struggled in his absence. A midfield enforcer who moves the ball forward at speed with unerring accuracy, his England call-up was much deserved.

Right midfield: Mohamed Salah (Liverpool) Unlikely to struggle in quarantine after testing positive for coronavirus, given how often he seems to find himself drifting into splendid isolation on Liverpool’s right. With eight goals in eight games, the apparently tireless Egyptian continues to excel in a side not yet firing on all cylinders.

Centre midfield: James Ward-Prowse (Southampton) Practically peerless over a dead ball, Ward-Prowse has chipped in with three goals and one assist to help his team scale unprecedented Premier League heights. His longstanding partnership with the tireless Oriol Romeu in the heart of Southampton’s midfield has proved stunningly effective.

Centre midfield: Ross Barkley (Aston Villa) Revitalised since his loan move from Chelsea, Barkley has taken on many of the creative responsibilities previously shouldered almost exclusively by Jack Grealish. Was instrumental in his side’s victories over Liverpool and Arsenal, and has the air about him of a player finally on top of his game. 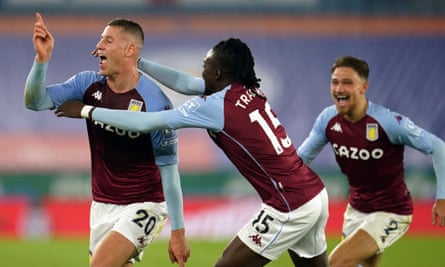 Left midfield: Son Heung-min (Tottenham) The arrival of Lucas Moura in 2018 prompted speculation Son might have to move to get regular first-team football, but the South Korean continues to excel. Well on course to hit double figures for the fourth consecutive season, the winger has eight goals and two assists.

Striker: Harry Kane (Tottenham) Enjoying his sixth consecutive campaign as a prolific Premier League scorer, the goals show no sign of drying up for this one-season wonder. Kane has seven Premier League goals since mid-September and chipped in with one goal and a record-breaking four assists for Son in the rout of Southampton.

Champions League: Diogo Jota hat-trick does not give me a selection headache – Jurgen Klopp

A-League returns with a coronation, but could end with a free-for-all | Jonathan Howcroft