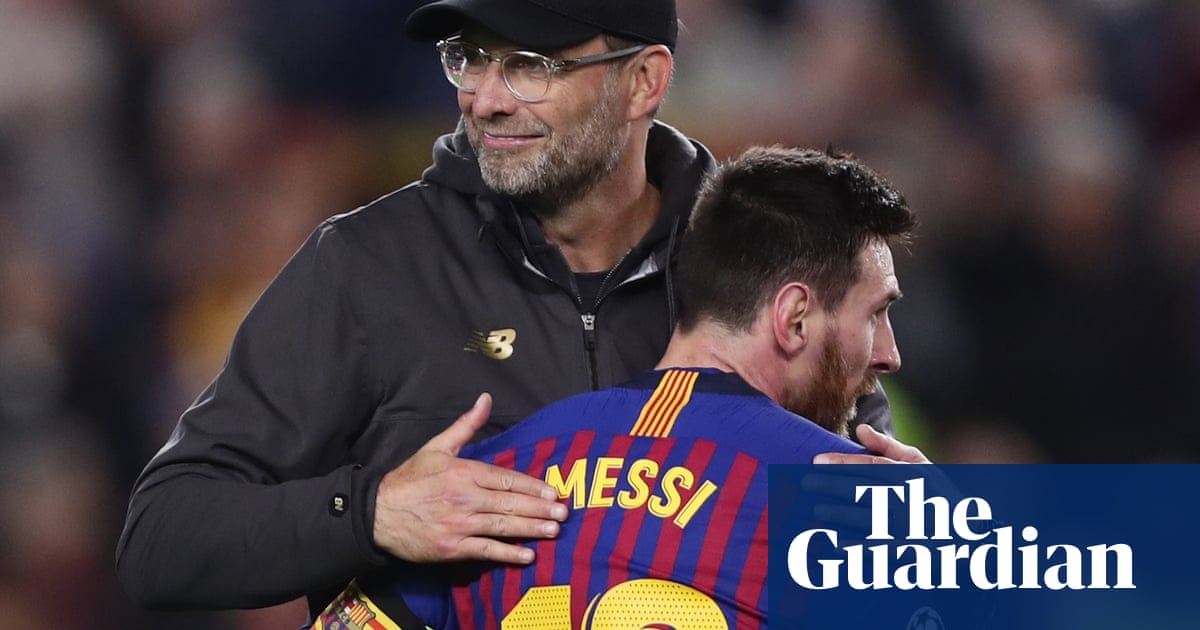 Messi scored twice to bring up a staggering 600 goals for the Spanish champions, 14 years to the day since his debut goal for the club. His second of the game – an incredible free-kick swept into the top corner of Alisson’s goal from distance – gave Barcelona a 3-0 advantage that Klopp accepted would be difficult to overturn in Tuesday’s second leg at Anfield.

Liverpool can consider the scoreline harsh. Sadio Mané and Mohamed Salah missed excellent chances to change the complexion of the tie but their manager, while proud of the performance, admitted there was no answer to Messi.

“In these moments he is unstoppable,” said Klopp. “We couldn’t defend the free kick. What a strike.

“The second goal was probably not the nicest in the career of Lionel Messi but it shows his skills that he is even there in that moment. Apart from that I was happy in how we defended the whole Barcelona team. I am a big admirer of them, as is everybody, but my boys didn’t show too much respect, they were there every time.

“We played football and I liked that. I knew before that Lionel was a world‑class player and now I saw it again I am not too surprised.”

Incomparable Messi reminds Salah who is master of left-footed arts

Ernesto Valverde, the Barcelona coach, said his team “had to suffer for the clean sheet” but the free-kick left him lost for words. “Messi always surprises you,” he said. “I don’t know how he does it. He also does it in times when we need it. We gained some breathing room with his runs to their penalty area when we needed it.”

Messi, however, cautioned against over-confidence. “We know that it is not decided,” he said. “We still have to go to a very difficult stadium, but we are very happy.”

Defeat was Liverpool’s first in 20 matches and their first in five visits here. It was also their fourth away defeat of the Champions League campaign but Klopp insisted it was their best performance on the road in Europe this season. “I am not sure if we deserved a lot more than we got,” he said. “We played a really good game but in the end they scored three and we didn’t score.

“As a manager, what I judge on is how we played. I am completely happy and proud of the boys, it was the best Champions League game we played not only this year but last year as well. How we defended, how brave we were in these situations, how we were when we got the ball. We were not always brilliant but we controlled the game in moments and created. Maybe not constantly chances but we had moments.

“No one will be interested but a few football nerds because it is about the result and we lost 3-0, but I can work really good with this game. I will use it for ever to show the boys what is possible. It was a brave performance, very passionate, very lively. I liked the game but it doesn’t really help.”

Klopp was realistic in his assessment of Liverpool’s prospects for the second leg, admitting there was still hope, albeit incredibly slim without an away goal.

“Because it is football, yes,” he said. “But before this game we had a bigger chance, let me say it like this. It is difficult. It is Barcelona and they can play for counterattacks, which doesn’t help us a lot.

“Because it is football we should still try but it didn’t make our life easier tonight. It is not the night to be mouthy and saying it is exactly what we wanted, that if we score an early goal and all that. It will be another really difficult game.”

The Mumbai Indians celebrate after beating the Chennai Super Kings in the 2019 IPL final in Hyderabad. Robert Cianflone/Getty Images Leading cricketers from