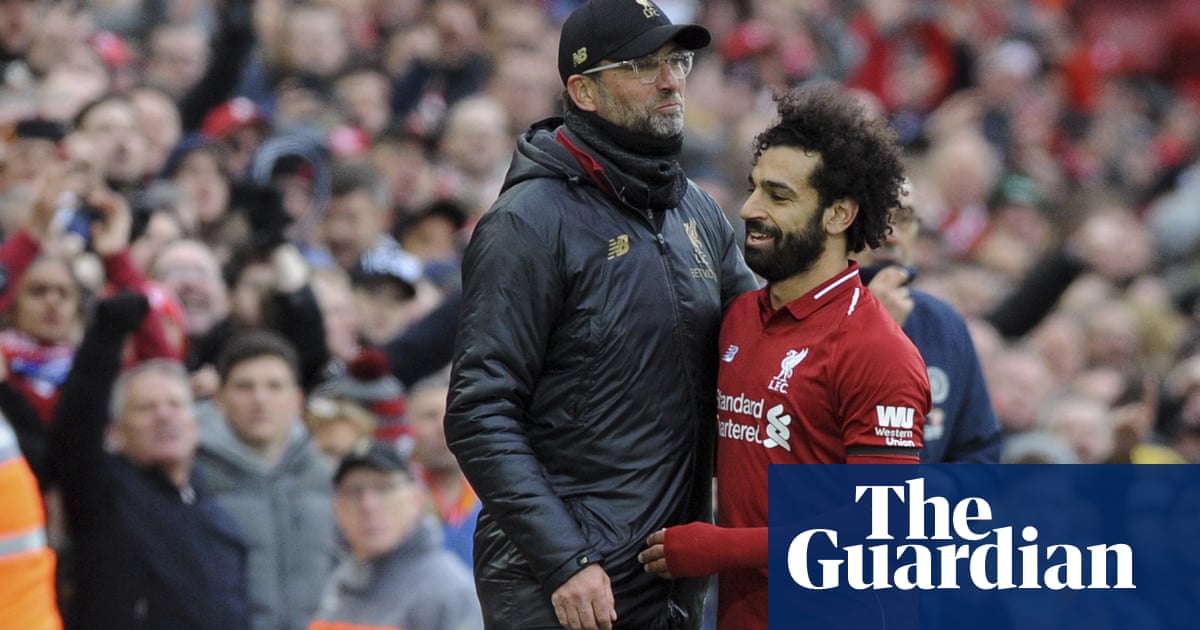 Jürgen Klopp was blown away by the brilliance of Mohamed Salah’s strike against Chelsea as he urged Liverpool to produce a flawless finish to the Premier League title race.

Salah struck an astounding goal 142 seconds after Sadio Mané opened the scoring at Anfield as Liverpool retook a two-point lead over Manchester City with victory against Maurizio Sarri’s side. Klopp was thrilled by what he described as a complete team performance and the buildup to Mané’s 13th goal in 16 games but it was Salah’s emphatic finish past Kepa Arrizabalaga that left him momentarily speechless.

Mohamed Salah downs Chelsea and keeps Liverpool ahead of City

“It blew me away,” the Liverpool manager said. “I didn’t think anything in that moment but I know I was really happy because I was in line with the ball and maybe I saw first that it would go in. It was a really outstanding finish and I don’t want to minimise that but I loved the first goal, too. I was immediately reminded of the 4-3 against Borussia Dortmund. Hendo instead of Milly and Sadio instead of Dejan, but good team play, good cross, good header. The performance was really good but you need the goals, and we got them.”

Salah has 19 league goals, 22 in total, but had been on a barren run by his standards of one goal in 10 games before sealing victory against his former club. Klopp said of the drought: “The answer in football is always work rate and the work rate of all three up front was outstanding. Chelsea is a top team. We treat these games like Champions League games, nothing else, and you cannot defend a team like this without offensive wingers. Everybody uses it. Each top team takes that risk. How the boys worked today was unbelievable. And they got the reward for that. You can get an easy goal from a yard or a shot from 25 yards, a thunderbolt. Outstanding.”

Liverpool are only four wins from their first league title since 1990 should City slip up in any of their remaining five matches. Klopp insists the focus is on finishing the season with 97 points and not on what Pep Guardiola’s team produce.

“The biggest challenge for us is always facing the world outside. We play our game. If City lose today, and we find out five minutes before the game, somebody tells us “City lost!” then that is not a help. You lose your focus then. We only try to collect as many points as possible. What is it now, 85? Four games to play: 97. Let’s try. And if that’s enough, then perfect. If not, we cannot change it. And we didn’t lose it here or there or whatever.

“Very smart people will come out and say: ‘Yeah, if you would have won against Leicester you would be champions.’ It’s all bullshit. People and idiots bring something like this up. By the way, on this point, we can finally close the slipping book. Robbo slipped and nothing happened, so it’s not a Liverpool thing. Done.”

Sarri lamented Chelsea’s slow start to the second half that cost them what he admitted was the plan of keeping the match goalless until the closing stages. The Chelsea manager, who has lost five of his past seven away league games, said: “We were a little bit low defensively at the beginning of the second half but we also defended a bit low at the beginning of the first half. It is not easy to play against Liverpool in that moment.

Why my club could sign: Bayern Leverkusen midfielder Kai Havertz