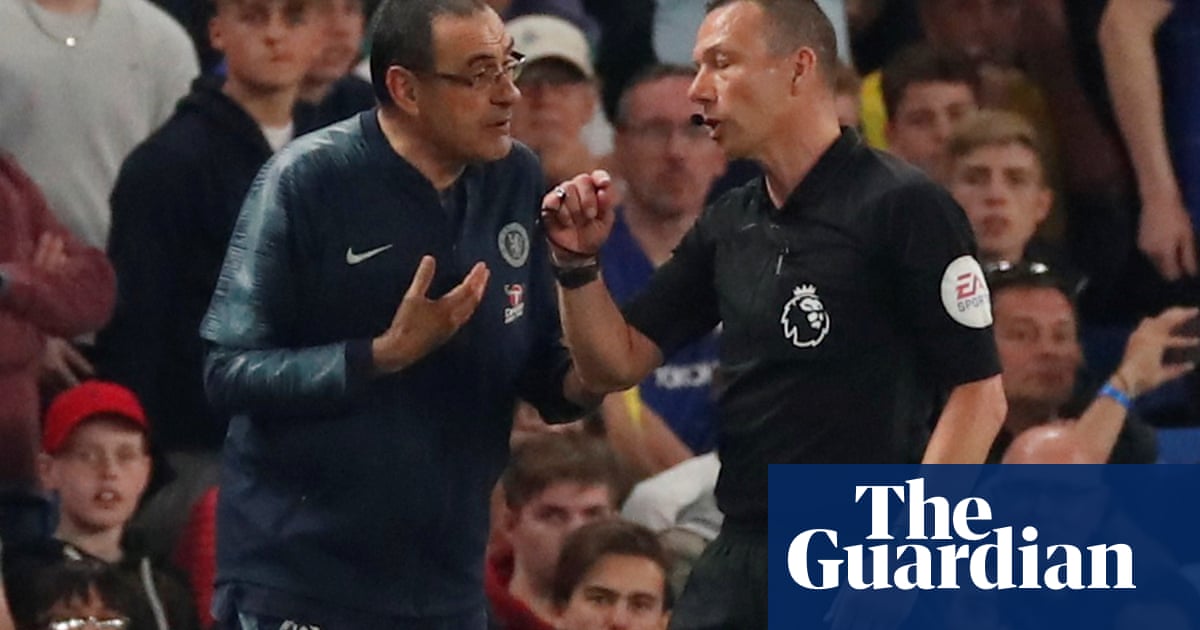 The Football Association will assess the referee Kevin Friend’s match report from Stamford Bridge before deciding whether to investigate claims lodged by Chelsea that Maurizio Sarri was repeatedly called “a shit Italian” by members of Burnley’s backroom staff.

Sarri was involved in numerous confrontations with those in the away technical area during Monday’s fractious 2-2 draw, with frustrations spilling over in stoppage time as players clashed on the pitch. The head coach was sent to the stands by the referee having run down the touchline, apparently to try and calm the situation, and appeared to point a finger at the Burnley goalkeeping coach, Billy Mercer, at the mouth of the tunnel as he departed.

It is understood that Sarri heard members of the visitors’ staff allegedly call him “a shit Italian” on several occasions – the manager, Sean Dyche, was not involved – and Chelsea staff spoke to the referee post-match. The official apparently indicated he would include reference to their allegations in his match report. It is not clear whether the fourth official Roger East, who regularly found himself ushering Sarri away from the Burnley technical area and was far closer to the protagonists, had also heard the alleged comments.

“Maurizio’s very frustrated, he’s been sent off and I think he’s been offended as well,” said the Chelsea assistant first-team manager, Gianfranco Zola, who had bemoaned Burnley’s perceived timewasting tactics through the tempestuous fixture. “He’s frustrated at the game, frustrated at being sent off, and the other thing. I think he’s been told something from their bench, but don’t ask me exactly what.

“I don’t want to go down that line, but we’ll see what we can do about that. I think there will be a follow[-up] on that. Maurizio felt very unhappy. We understand it’s a football game. You say words because of the adrenaline, but he wasn’t particularly happy.”

Details of the fracas after the final whistle, when Mercer clashed with the Chelsea coaches Paolo Bertelli and Massimo Nenci, as well as the injured player Antonio Rüdiger, are also sure to be included in the report. Both clubs face charges of failing to control their players and staff, while Sarri is likely to face sanction for his dismissal. Burnley could also face punishment if it is proven that members of their staff had provoked him.

Burnley will wait to ascertain what has been included in Friend’s report but, at present, have no plans to launch their own investigation into Chelsea’s allegations. Dyche had made light of the suggestions his staff had engaged Sarri in his post-match observations, saying: “I don’t think my coaches’ language skills are that good. It wouldn’t have been a deep conversation.”

The Burnley manager had spoken to Zola at half-time over Sarri’s tendency to encroach in the opposing technical area, something that has happened consistently over the course of his first season in English football. “He said at half-time [Sarri] is not quite getting it,” said Dyche of his conversation with Zola. “I said he was going over into my box. He just said he didn’t quite get the reality of it – they’re bigger in Italy. OK. He’s been here a while, mind. I said ‘fine’ and accepted it.”

The Chelsea and England winger, Callum Hudson-Odoi, is to undergo surgery this week on the Achilles tendon he ruptured in his right leg when falling awkwardly during the first half on Monday night. The 18-year-old will miss the rest of the campaign and the summer’s Nations League, but hopes to be in contention to return at the start of next season.

Which maverick outfield footballers have worn the No 1 shirt? | The Knowledge

No football, no A-League grand final, no hype… but also no despair | Jonathan Howcroft