Skip to content
You are here
Home > EltasZone > European roundup: PSG hammered by Lille while Bayern go back to top 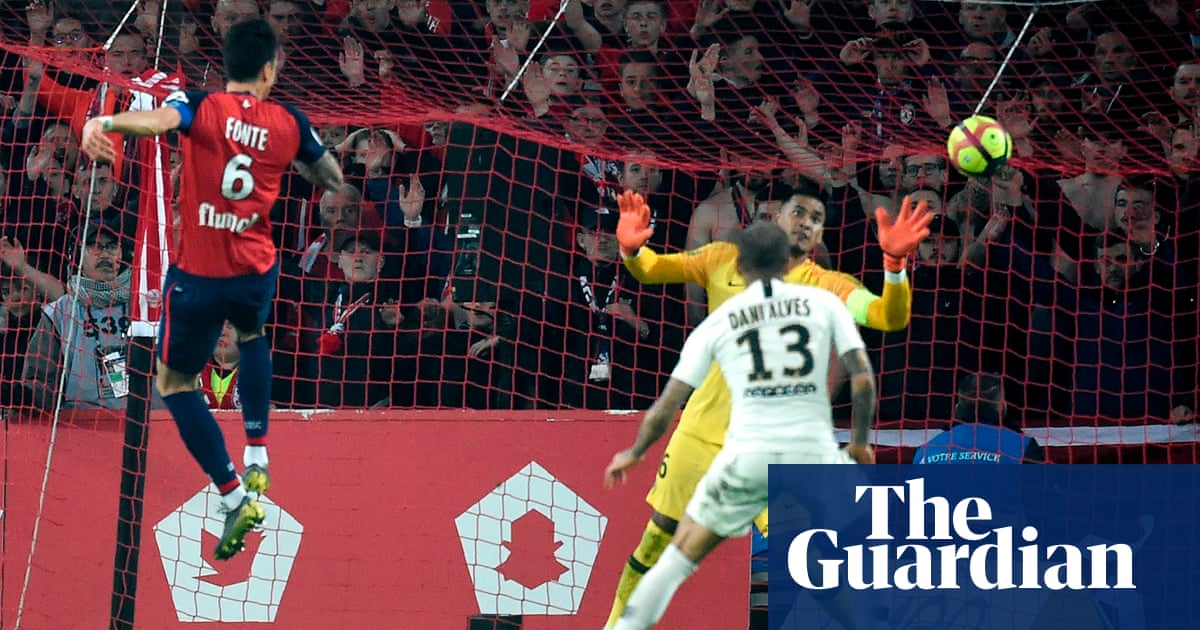 Paris Saint-Germain must wait to secure the Ligue 1 title after a humbling 5-1 defeat to second-placed Lille on Sunday.

Second-half goals from Nicolas Pépé, Jonathan Bamba, Gabriel and José Fonte inflicted a painful defeat on PSG, who had Juan Bernat sent off in the 37th minute after losing Thiago Silva and Thomas Meunier to injury.

Kylian Mbappé had two efforts disallowed for offside in the first half, in which Lille led through a Meunier own goal before Bernat replied.

PSG’s eighth title remains a matter of time but they have now passed up chances to confirm it on consecutive Sundays after last week’s 2-2 draw with Strasbourg.

With Lille’s first real attack, Jonathan Ikoné crossed from deep on the right and Meunier inadvertently turned it into his own net with Alphonse Areola wrong-footed. PSG needed four minutes to respond as Mbappé controlled a bouncing ball and floated over a looping cross for Bernat to finish.

PSG’s problems began to mount as they lost Silva and then Meunier to injury but the biggest blow to Thomas Tuchel’s plan came eight minutes before the break when Bernat was sent off for a tug on Pépé. It looked soft – with the contact surely not enough to send the Lille man to the floor – but with Pépé through on goal the referee stuck by his decision after consultation with VAR.

Five minutes after the break Lille struck on the counterattack, Pépé slipping the ball under Areola after Ikoné’s ball split the PSG defence. In the 65th minute Bamba rifled the ball past the keeper at his near post after breaking the offside trap. PSG looked lost and were further punished in the 71st minute when Gabriel headed in Pépé’s free-kick for his first Ligue 1 goal. The former Southampton defender Fonte headed in Pépé’s corner for a fifth.

Bayern Munich moved back to the top of the Bundesliga after Kingsley Coman’s first-half double spearheaded a 4-1 victory at Fortuna Düsseldorf.

Borussia Dortmund went to the summit on Saturday after edging out Mainz but Bayern reclaimed their position, with Coman setting them on their way after a quarter of an hour.

He doubled his and Bayern’s tally just before half-time and Serge Gnabry gave the visitors a 3-0 lead in the 55th minute. Dodi Lukebakio pulled one back for Düsseldorf in the penultimate minute but Leon Goretzka restored Bayern’s three-goal cushion in time added-on.

Eintracht Frankfurt missed the opportunity to consolidate fourth spot after a surprise 3-1 defeat by lowly Augsburg, who moved seven points clear of the drop zone.

Gonçalo Paciência put Frankfurt ahead in the 14th minute but Marco Richter struck twice before half-time. Michael Gregoritsch made sure of the win for Augsburg six minutes from time. Frankfurt’s Gelson Fernandes was sent off just after the restart.

Nadiem Amiri’s 29th-minute effort and a goal from the on-loan Arsenal forward Reiss Nelson with a quarter of an hour remaining gave Hoffenheim a 2-0 triumph over Hertha Berlin.

Napoli delayed Juventus’s coronation as Serie A champions for another week at least as a goal in each half from Kalidou Koulibaly helped them secure a 3-1 win at Chievo.

Juventus could have ended the title race by avoiding defeat at Spal on Saturday but suffered a shock 2-1 loss, and Napoli closed to within 17 points of their rivals with six matches remaining. Arkadiusz Milik also scored for Napoli before Bostjan Cesar grabbed a late consolation for Chievo.

Third-placed Internazionale regained their five-point lead over fierce rivals Milan after a 3-1 victory at Frosinone, who are eight points adrift of safety.

Goals from Radja Nainggolan, an Ivan Perisic penalty and Matías Vecino clinched Inter’s victory. Francesco Cassata pulled one back for Frosinone just after the hour mark.