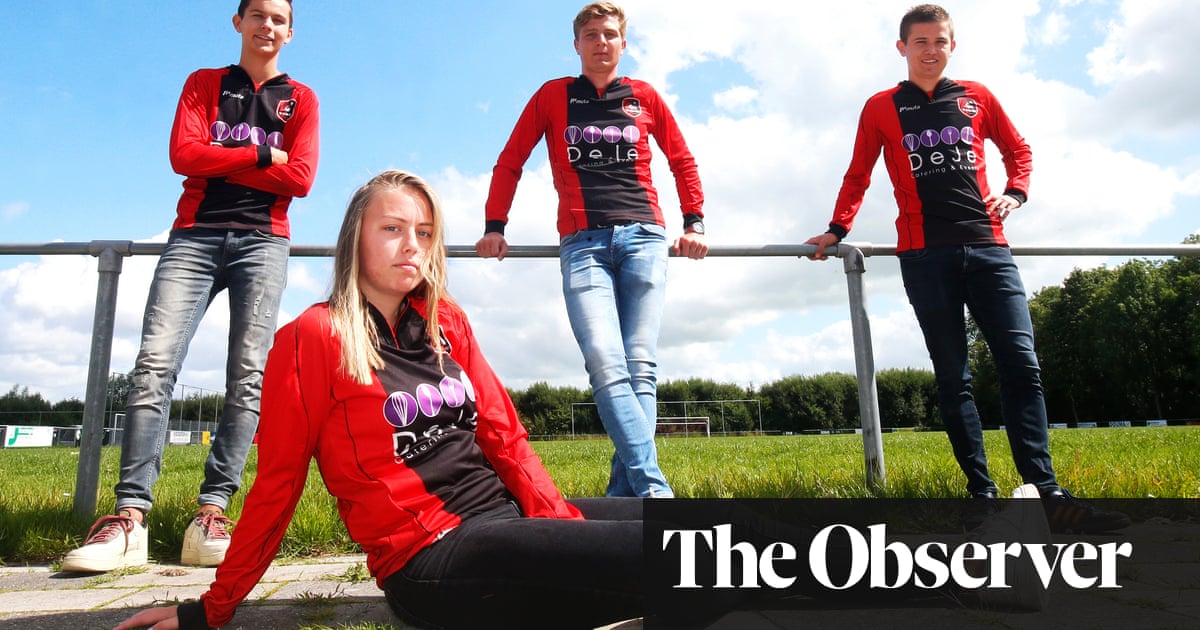 Ellen Fokkema is proud, and excited, to be the face of a controversial experiment that could see the advent of mixed-gender adult football in the Netherlands. Until this month, the KNVB had barred women over 18 from playing in senior men’s first teams, but the Dutch Football Association has now – on a one season-only trial basis – agreed that the 19-year-old can continue turning out for her local club.

“It’s fantastic I can keep on playing in this team, I’ve played with these lads since I was five,” says the forward from VV Foarut, in the Frisian village of Menaam.

Given its population is only around 2,600, Menaam lacks a women’s side and, without her newly minted dispensation, Fokkema would have been forced to decide between appearing for VV Foarut’s reserves – adult women are not banned from amateur B teams in the Netherlands – or, possibly, give up football.

“It would have been a real shame if I hadn’t been in the team next season; why shouldn’t it still be possible?” says Fokkema. “I’ve no idea how it’ll work out, but I’m super happy to be taking part in the pilot. It’s quite a challenge, but that only excites me more.”

Art Langeler, the KNVB’s head of football development, seems delighted by an experiment taking place in the fourth tier of the eight amateur leagues sitting beneath his country’s two professional divisions.

“Every year there’s a request from an association to let a woman play football in their men’s first team,” says Langeler. “In my opinion it’s special that girls at all levels can play mixed football. The KNVB stands for diversity and equality. We believe there should be room for everyone in every way.

“Moreover, in these cases there’s a nice sporting challenge we don’t want to block. That’s why we’re starting this pilot. Experience will tell if, and how, it works. We’ll monitor how things are going in close consultation with the club. Based on that, we could apply a change of regulation.”

Langeler’s logic reflects an incremental shift in attitudes throughout Europe. The English Football Association bars mixed football at the age of 18 – up from 16 in 2015 – but has recently debated allowing it at adult Sunday league level. In Germany and Italy, the cut-off point is 17.

Although there is no ban on mixed games in Denmark – very much an outlier – a significantly higher proportion of junior girls play for male youth teams in the Netherlands than elsewhere across the continent.

Pauw – previously in charge of the Netherlands, South Africa and Houston Dash – regards a 1986 rule change allowing Dutch girls under 12 to join boys’ teams for the first time as a watershed. “The outcome was so extremely positive it opened the door to competitive mixed-gender football throughout the whole pathway of youth football,” she says. “The final step to the under-19s leagues was made at the end of the 1990s.

“It brought a whole base of knowledge into the [Netherlands women’s] squad they’re still profiting from. Every current national-team player comes out of these leagues; every single one has played with and against boys. This is what sets us apart from other countries.”

Several England internationals, including Lucy Bronze, Rachel Daly and Leah Williamson, played in boys’ teams until around the age of 12. Although opinion is divided on the merits of mixed football and, particularly, the risk of injury at adult level, Williamson feels girls can only improve by learning to compensate for their physiological disadvantages on the pitch.

“Young girls develop an understanding of football from playing with boys,” says the Arsenal defender. “We can’t rely on physical attributes, we can’t rely on pace and power, so we have to be clever. That skill transfers to the women’s game when we’re older.”

The big debating point is the gender separation threshold, with the former England and Chelsea midfielder Katie Chapman among those against the rise from 16. “The difference in our mechanics does become an issue,” she says. “Men are quicker and stronger. I think 18 is quite high.”