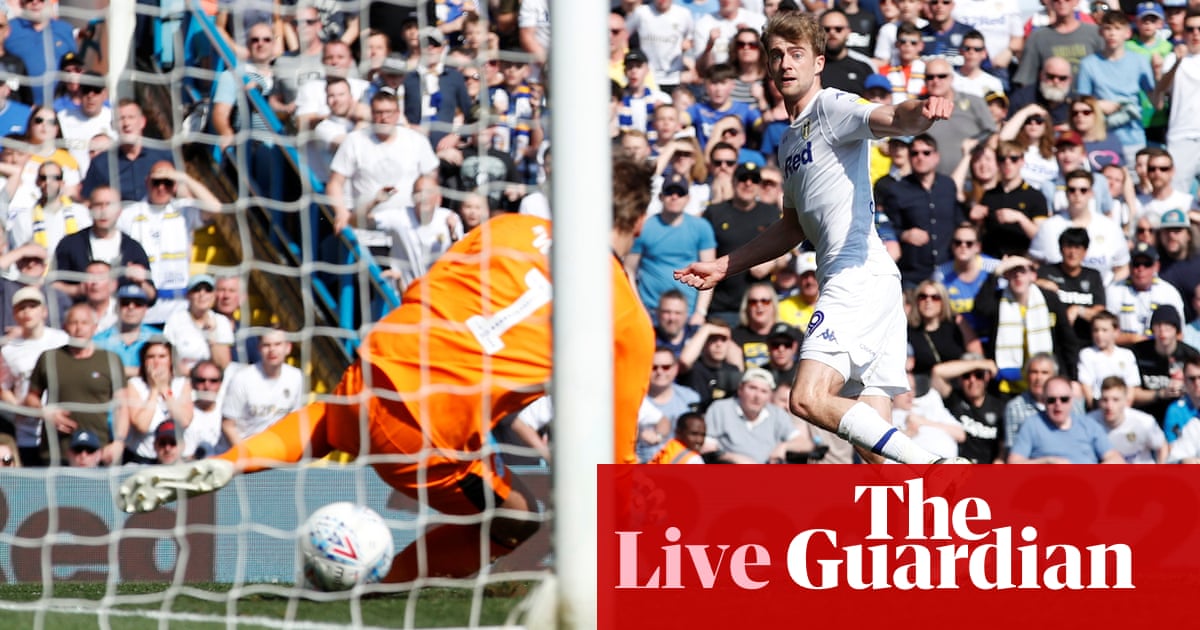 Oof! Ten-man Wigan have a lifeline at Elland Road, with Gavin Massey lashing home inside Kika Casilla’s near post. As things stand – with Rotherham winning – that Wigan goal would be enough to keep them above the dotted line, for time being at least.

Moving on up – again – are Rotherham, courtesy of another Matt Crooks goal.

Oli McBurnie equalises with his 18th goal of the season. A goal that has huge consequences for Rotherham, Wigan and Bolton, who will be relegated this evening as things stand. In League One, results are also going against Bradford City, who look to be heading down to League Two.

And now Richard Keogh, the Derby captain, is on the scoresheet, scooting round the back post to head in unmarked. A potentially huge goal for Frank Lampard’s side.

A flurry of goals! Preston 2-0 Ipswich, QPR 0-1 Blackburn. In League One, AFC Wimbledon lead Bristol Rovers, who are not yet safe themselves. Anthony Hartigan’s low ball is converted first-time by Joe Pigott. As it stands, Wally Downes’s side are heading out of the relegation zone.

Frank Lampard shakes his head as the Birmingham captain Michael Morrison puts his side back in front.

Seconds, more or less, after missing a penalty, Leeds lead.

Pablo Hernández misses a penalty for Leeds! He rattles a post. But Leeds do at least have a man advantage for the remaining 75-odd minutes. In League Two, Newport are 2-1 up against Bury and Jääskeläinen’s Crewe are 1-0 up against lowly Yeovil.

Penalty to Leeds! Pablo Hernández will take it! And red card for Wigan’s Cédric Kipré. Plus, a statistical update to the news Will Jääskeläinen, son of the former Bolton goalkeeper Jussi, is making his Crewe debut. When Jussi made his English league debut for Bolton in August 1998, Will was just 14 days old …

Advantage Rotherham in south Wales. Michael Ihiekwe glances home Will Vaulks’s inswinging cross. As it stands, that goal would be enough to condemn Bolton to an inevitable – and sad – relegation. And we have an equaliser at Birmingham, with Martyn Waghorn restoring parity for Derby at St Andrew’s. Preston, meanwhile, lead relegated Ipswich.

Asked if he will be tuning into Leeds’ game with Wigan, Chris Wilder replies: “No. I’m going for a beer.” Another soundbite from the early Championship action, courtesy of Lee Johnson. “We won every stat apart from the most important one,” says the Bristol City head coach. “It is not a disaster. We have big games to come and we will thrive in that uncertainty.”

Britt Assombalonga gives Boro a dream start at the Riverside. And a big goal at St Andrew’s too, where Derby trail Birmingham inside the opening few minutes. Lukas Jutkiewicz has given Garry Monk’s side the lead there.

A big result for the top and bottom of League Two! Crawley Town earn back-to-back away wins for the first time this season to open up some breathing space between them and the bottom two. They have essentially ensured safety, stretching the gap to 23rd-placed Yeovil, who have four games to play, to 12 points. For Exeter, that is a blow to cementing their top-six berth, with Carlisle among the teams that can apply some heat in the battle for the play-offs. Some full-time scores then, as the 3pms get started:

Surely a first for fifth-tier football matches … such is the interest in Leyton Orient’s bid to return to the Football League, the club say they are aware of false tickets being sold for their crunch Easter Monday match-up with Solihull Moors on the black market. A brief Orient statement said: “We have received reports that fraudulent tickets for Solihull Moors on Monday are being sold on the Leyton High Street. These tickets are fake. Please don’t purchase tickets from unofficial sources.” National League leaders Orient, who have three games to play, host Harrogate Town this afternoon.

A couple more nuggets of team news: a big boost for Aston Villa as Jack Grealish and Tyrone Mings return to the starting XI at Bolton, Leeds are unchanged at home to Wigan, while there is no Jack Butland for Stoke against Rotherham, with the England goalkeeper absent following the birth of his son, George. Congratulations and best wishes to the Butland clan!

Some big – well, 6ft to be precise – team news at Gresty Road, where Jussi Jääskeläinen’s son, Will, makes his Football League debut for Crewe. Jääskeläinen was released by Bolton two years ago and makes his bow alongside another former Trotters staple, with Nicky Hunt also in the starting lineup against a Yeovil side in desperate need of three points:

Sheffield United double their lead over Nottingham Forest! Enda Stevens drills into the bottom corner to pile the pressure back on Leeds getting the job done against Wigan a little later. That is mightily big goal at Bramall Lane, as it also prevents Norwich from being able to rubber-stamp promotion to the Premier League at Carrow Road this evening.

That’s it from me now. Ben Fisher is ready and waiting to take you through a crammed afternoon of Football League fun. Email Ben here, or tweet him @BenFisherJ.

Full-time at Ashton Gate: it’s all-square there, as Reading hold Bristol City to a 1-1 draw, meaning the Robins will drop out of the playoff spots if Derby and/or Middlesbrough win later. It also means Reading can’t now be caught by second-bottom Bolton, who will be relegated today should they lose to Aston Villa.

Some half-times in League One: Lyle Taylor gave Charlton the lead at Oxford United but it’s now 2-1 to the home team thanks to Curtis Nelson and Luke Garbutt, while Coventry City lead Bradford City 1-0 thanks to a Jordy Hiwula-Mayifuila goal. Bradford have also had Nathaniel Knight-Percival sent off and, if my maths are correct, they will be relegated today if that result sticks.

Duffy on the right, forces Pantillimon into a scrambling tip over the bar from what might have been an audacious shot, or more likely a slightly miscued cross. Norwood tries a shot himself but howls at the moon as it sails into the Kop. Scott Hogan, once upon a time a £10million striker, comes off the bench to replace Gary Madine.

A change for Forest, as Daryl Murphy is winched off, replaced by Lewis Grabban. Meanwhile Baldock has a golden chance to either double United’s lead or set someone else up to, but dithers for so long that even the Forest defence has time to swoop in and get the ball off him.

A red card at the New Den too, where Brentford’s Henrik Dalsgaard is enjoying a solitary bath after tripping Ben Thompson when clear on goal. Thompson has since been subbed off, I assume as a consequence of the foul.

M-m-m-m-m-m-match p-p-p-p-preview: here’s what you need to know about Huddersfield vs Watford.

Big save by Pantillimon, changing direction and diving low to his left to paw away a slightly miss-hit effort from McGoldrick.

Sheffield United take the lead against Nottingham Forest! The Blades take advantage straight away, as Mark Duffy collects a loose ball on the left side of the box, is allowed an age to line up his shot but executes it beautifully, curling beyond Costel Pantillimon.

Nottingham Forest are down to ten men after Yohan Benalouane was sent off for taking out David McGoldrick while clean through. A clear goalscoring chance even though there were a few defenders in the general area, but Benalouane insists he didn’t touch his opponent and he might have a point. Martin O’Neill is quite literally hopping mad. Centre-back Alex Milosevic comes on in place of Pele. Not that one.

Let’s have a quick chat about Denis Suarez: in a crowded old field, this could be the most pointless signing Arsenal made for some years. Signed in a position they didn’t really need to sign anyone in anyway, he’s played a total of 95 minutes over four appearances, none of them starts, and is now out injured. Even Kim Kallstrom scored a penalty in the FA Cup semi-final shoot-out against Wigan. Arsenal will assess his groin twang ahead of the game against Crystal Palace tomorrow, from which Aaron Ramsey will be missing (and indeed probably from all future Arsenal games) while Sokratis Papastathopoulos is suspended.

Big few minutes at Millwall: Lee Gregory gave the home side the lead after turning home from a corner, but the lead was short-lived as Josh da Silva has already equalised for Brentford, curling one into the top corner from 25 yards. 1-1 with about 20 minutes gone.