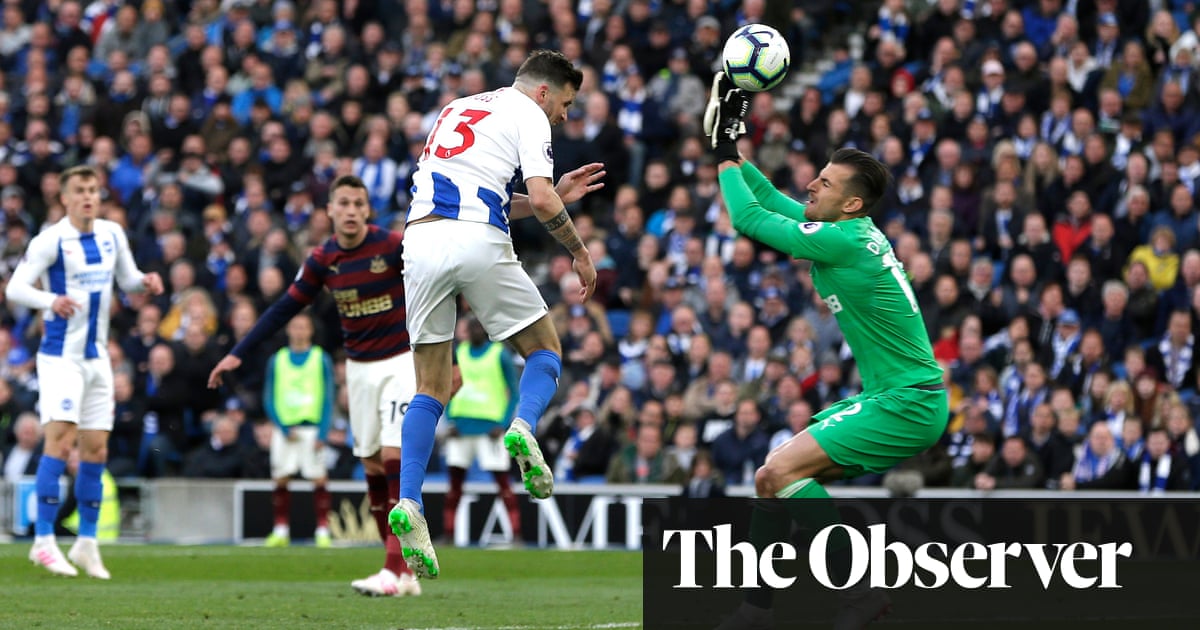 This game had edged into its final minute when Anthony Knockaert swung over a cross and Glenn Murray, free at the far post, rose marginally too early and nodded the ball over a gaping net. Chris Hughton buried his head in his hands in disbelief, the chance of a first league win since early March passed up. Yet, once the dust had settled, Brighton could still reflect on a point which may well have preserved their Premier League status.

The draw they secured late, with a first goal for seven weeks, has edged them four points clear of Cardiff and, even with daunting fixtures still to come against Arsenal and Manchester City, the likelihood is their current tally should prove sufficient to survive. Given the difference in respective goal differences, the Welsh club will realistically have to win their last two games, against Crystal Palace and at Manchester United, to stand a chance. That is probably asking too much.

The sense of dread that has gripped this corner of Sussex has eased marginally. Their team may be limping over the line but there was relieved applause, rather than the livid exasperation which had become the norm, to greet the final whistle. “It’s a step towards safety,” said Hughton. “The cautious part of me still has to think anything can happen but the feeling is still better now than it was at half-time. Relaxed isn’t the word but there’s relief that what looked such a poor performance which would likely leave us with no points became one which showed spirit and better quality.”

That recovery remains the real reason for optimism. It was hard to imagine a first-half showing more insipid than that offered by the hosts, a performance so abject that it arguably eclipsed the dreadful recent displays mustered in defeat to Bournemouth and Cardiff. They had been frozen by fear, even in the wake of City’s defeat earlier in the day, with no intensity, no urgency and, as a result, little conviction. Newcastle had merely played round them, with Jonjo Shelvey offered the freedom of Falmer to dictate the tempo. The visitors should have led by more than Ayoze Pérez’s goal at the break.

Yet a team who had appeared condemned would revive. Solly March’s introduction was the catalyst, the winger injecting some impetus to break the paralysis of the first half and shrug them free of the creeping panic. His scurries up the flank roused his teammates, belief suddenly lifted by the sight of March forcing Federico Fernández into a smart block. They were never scintillating but at least they were unrecognisable from the initial plod. “There were a few harsh words [at half-time], which is normal, but credit to the players,” said Hughton. “Sometimes there can be a turn in the game and Solly made a real difference.”

The equalising goal was simply constructed but smartly taken. Bruno’s cross prised the visitors apart, Murray finding space to head back for Pascal Gross, so rusty up to then after a season littered with injuries, to exploit space between Fernández and Paul Dummett and guide in Albion’s first goal in 735 minutes of football, the longest drought in the club’s history. “The first half was disappointing but we still believed,” said the scorer. “We are a team, we have to stick together and we deserved a point in the end.”

Had Murray gone on to win it, Newcastle would rightly have felt aggrieved given their early dominance. Pérez’s injury, to his right hip after a bodycheck from Shane Duffy, had contributed to the lopsided nature of their own display, though the Spaniard had been carrying the knock when he rasped the visitors ahead. The goal had summed Brighton up. No one sought to close down Dummett as he trundled forward on the ball, surveying the scene ahead and considering his options. His centre found Salomón Rondón’s chest, the Venezuelan having edged easily away from Bernardo and Lewis Dunk beyond the far post, with the ball dropping to Pérez, unmarked just inside the penalty area. The finish was emphatic.

Fabian Schär, bored at the back and strolling up beyond the grounded Dunk into the opposition penalty area, would have walked in a second had Mat Ryan not reacted. A second goal would have settled the occasion. As it was, Brighton were spared and breathe again.

Harley Willard: ‘Iceland’s a good place just to concentrate on your football’