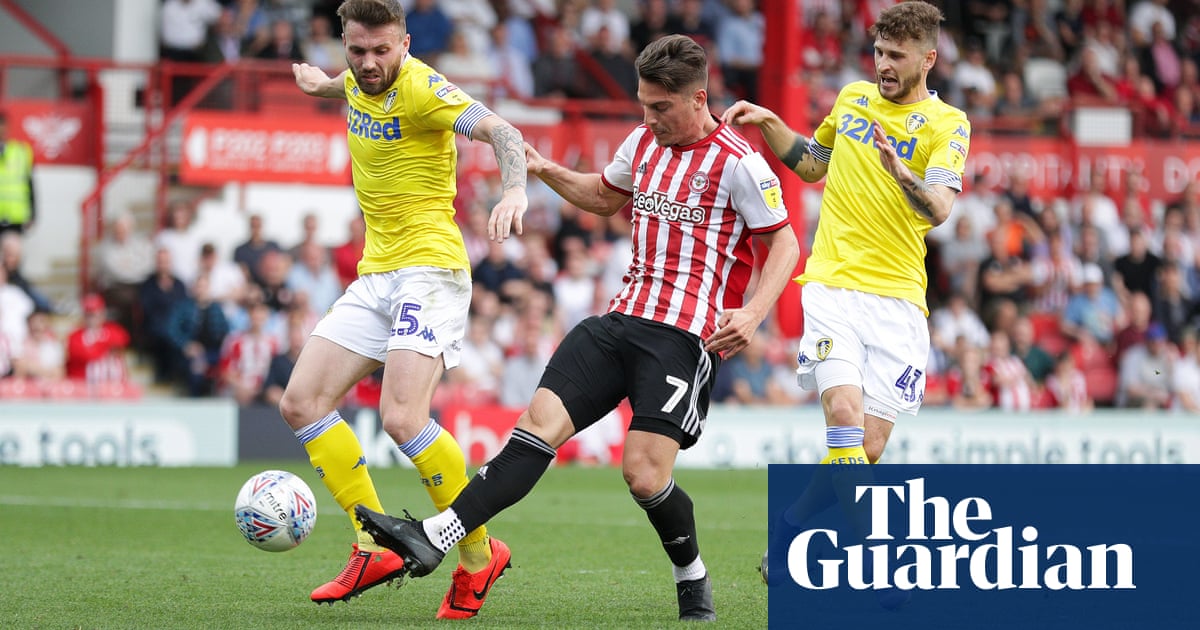 Leeds have spent 32 weeks in the automatic promotion places this season but, unless something remarkable happens in the last two, they will spend the most important week just outside them.

This defeat to Brentford was their second in four days, putting them three points behind second-placed Sheffield United and, because of a significant goal difference gap, realistically means they need the Blades to slip up in both of their remaining games. Given that one of those is against Ipswich, it does not look good.

Marcelo Bielsa bristles at any suggestion his teams fade, a consequence of his significant physical demands, but they looked heavy of leg and foggy of mind at Griffin Park. The home side made their league position of 15th look absurd by picking off Leeds with a pair of fine goals from Sergi Canós and Neal Maupay in either half. This has been a lost season for them but they did not play like it.

To the play-offs then, where Leeds have never won in four attempts and where, as things stand, they would face old friends Derby and Frank Lampard in the semi-finals. After “Spygate” that is good news for anyone who enjoys needle and narrative, and even better news for fence-erectors in the East Midlands.

This game was Leeds’s season, or at least the bad parts of it, in microcosm. They had 18 shots, only three of them on target, adding to the 36 they took against Wigan in their last game: those 54 efforts have yielded one goal.

“The game today looked like many games we’ve played this year,” Bielsa said. “We had offensive actions but without efficiency. If we had a normal efficiency we would have 10 or 12 more points than we do have.”

It all started pretty positively for Leeds. By the second minute they basically had five players in attack, four midfielders looking like their job was to make sure the centre-forward Patrick Bamford did not get lonely and, when converted winger Ezgjan Alioski was injured in the 15th minute, Bielsa brought on winger Stuart Dallas to replace him at left-back.

They should have been at least one ahead in the opening half hour, and Bamford was mystifyingly denied a penalty when he was tripped by Julian Jeanvier, referee Keith Stroud yards away but unreceptive. Bielsa sat unmoved on his upturned bucket, hands wringing in the manner of a man who has not relaxed in decades, and declined to comment on the decision.

Seconds before the break they were behind. Maupay found a gap between the Leeds centre-backs you could sail an oil tanker through, collected a through-ball from Canós and spanked it past Kiko Casilla. Brentford are in theory a better side than their performances this season, and players like Maupay and Canós are why: at least one is likely to be sold in the summer.

Leeds attacked straight after the break, Daniels tipping a Dallas shot over the bar while plenty were still returning to their seats. Bamford, a little more lively in the second half, had half a chance, Mateusz Klich shot over from outside the area, and their bubble of confidence grew.

But from virtually nowhere that bubble was burst and Brentford doubled their lead. Ollie Watkins nutmegged Pontus Jansson then fed Maupay, who in turn found Canós, and he clipped it over Casilla. “Leeds, Leeds are falling apart again,” sang the home fans, while one man of some vintage removed his shirt and twirled it around his head, then gave a steward a peck on the cheek when asked to stop.

Is the pressure getting to Leeds? Not according to Bielsa. “I will paraphrase Tiger Woods: he says when you’re fighting for something important, you have pressure but if there is something I can say for sure, this team is never affected.” With the suffocating pressure that lies ahead, Leeds fans had better hope that is true.

At the final whistle, Bielsa shook the hands of all his players, an act of encouragement after their hopes of automatic promotion slipped away. Pablo Hernández wiped away tears as he left the pitch. After such a heartening season thus far, Leeds will now have to rouse themselves for the play-offs.

Premier League 2018-19 review: the big quiz of the season

Socceroo Thomas Deng: ‘It’s our time to be a voice for Africans’ | Lucas Radbourne