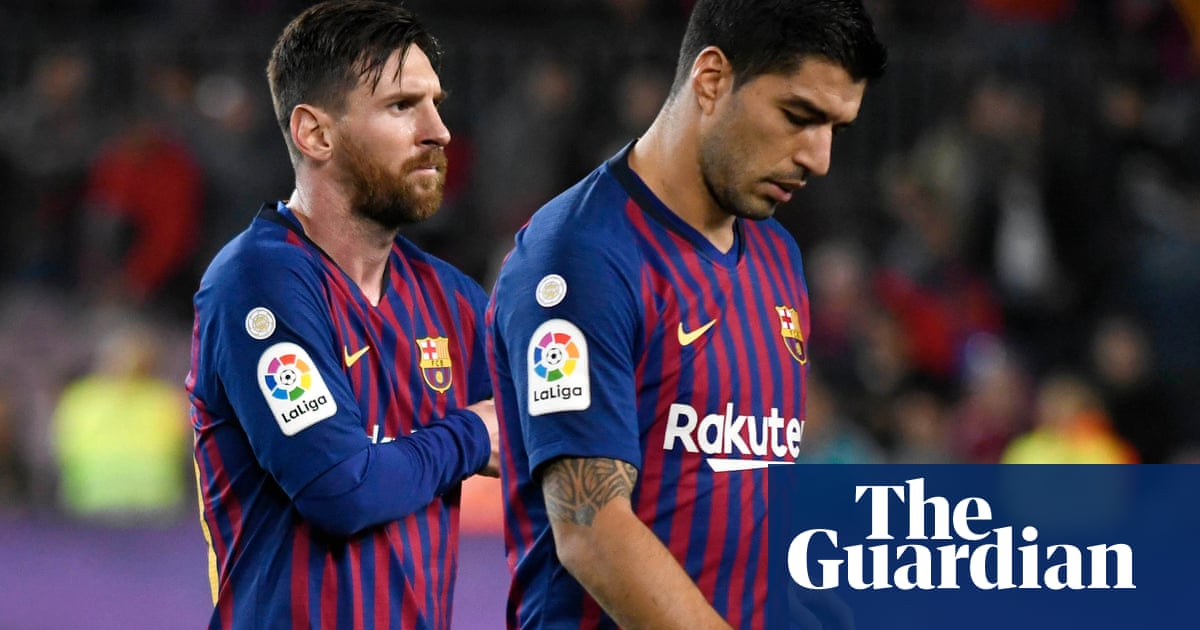 Just before the second half began on the day that Barcelona last lost a home game, back in November, Luis Suárez and Lionel Messi sat on the stairway that leads from the dressing room to the Camp Nou pitch trying to work out what had happened. For 45 minutes they had been overwhelmed; they were already 2-0 down and it could have been more. By the final whistle it was. Barcelona were defeated 4-3 by Real Betis.

It did not happen again: they have won 18 of 23 league games since then and are unbeaten in the Champions League. They have not lost a European game at home since 2013. Apart from a Copa del Rey quarter-final first-leg defeat at Sevilla, when they left out Messi, Suárez, Philippe Coutinho and Sergio Busquets, they have lost only twice this season: 2-1 at Leganés and the 4-3 defeat to Betis. If there are lessons for Liverpool from those two matches, they are different ones.

“Team sports allow you to take the game where you want, to make it hard for [better] opponents and create a game where they are not comfortable,” the Leganés manager, Mauricio Pellegrino, said. His side trailed Barcelona 1-0 early on but two goals in 68 seconds gave them the victory, the first coming from a long ball over the defence, the second from an error by Gerard Piqué. Leganés played three central defenders and conceded the ball. At one point Barcelona’s possession stat was as high as 85% but they were blunted and Leganés were lying in wait.

“We had to shift across quickly, to close the gaps, and fill the middle; we thought Coutinho, Messi and Sergi Roberto would play inside,” Pellegrino said. “They have so much quality that you can’t leave them that space. You lose some of your attacking [potential] but we had the speed of [Youssef] En Nesyri.” It was an approach he had used before: as Alavés manager, he is the last coach to win at the Camp Nou in La Liga.

The victory for Betis could hardly have been more different – and may be more applicable for Liverpool. They scored four times, overran their opponents and had as much of the ball. Betis had prepared to press high, virtually to go man to man all across the pitch and rob in the opposition’s half – something Liverpool could replicate, although they would also be more equipped than Betis to play directly. Barcelona have looked uncomfortable when put under pressure and Busquets is isolated and stretched, forced to defend larger spaces and make longer, more continuous runs.

It is often suggested that Barcelona’s defence is their weak link but this season Marc-André ter Stegen, Piqué, Clément Lenglet and Jordi Alba could lay claim to having been their best players. The press had a defensive facet as well as an attacking one: Betis did not want to allow Barcelona to build from the back, outnumbering them from deep, free to play.

The approach was designed to stop the momentum from Barcelona’s press, turning their front three back towards their own goal. At that point Barça tend to fall into something closer to a 4-4-2 than a 4-3-3, liberating Messi and Suárez from some of the defensive duties – and also leaving them loose. The risk then is being caught on the break. If Messi was to receive, Betis were determined that he did so 70 metres from goal. In pressing, the idea was not so much to shut him down as to close off the passers.

Chances have to be taken when they fall and Liverpool have an efficiency in front of goal few teams can match. Barcelona have tended to produce their best performances in their biggest games, more liable to step up, press high and open the pitch, with Messi and Suárez covering more ground. Sometimes they cannot be stopped. The second time Betis played Barcelona – in March – there was a moment when Piqué went across to Ernesto Valverde, seeking solutions. Barcelona were ill at ease, again. But sometimes that is not enough.

Messi scored a hat-trick and was given a standing ovation by the Betis fans. “I’ve never seen anyone like him,” said their manager, Quique Setién, beaten 4-1 this time.

“Someone said to me once after a win: ‘Boss, you planned this game really well’ – I always plan well,” Pellegrino grinned. “I’ve beaten Barcelona twice but I’ve also been beaten by them eight times.”

Leighton Baines, the ego-free Evertonian, retires on his own unselfish terms | Andy Hunter

Editor's Note: This story was originally published on 9 September 2020. Three years ago, a 19-year-old Andrey Rublev became the youngest US Open quarter-finalist since Andy Roddick in 2001. The Russian