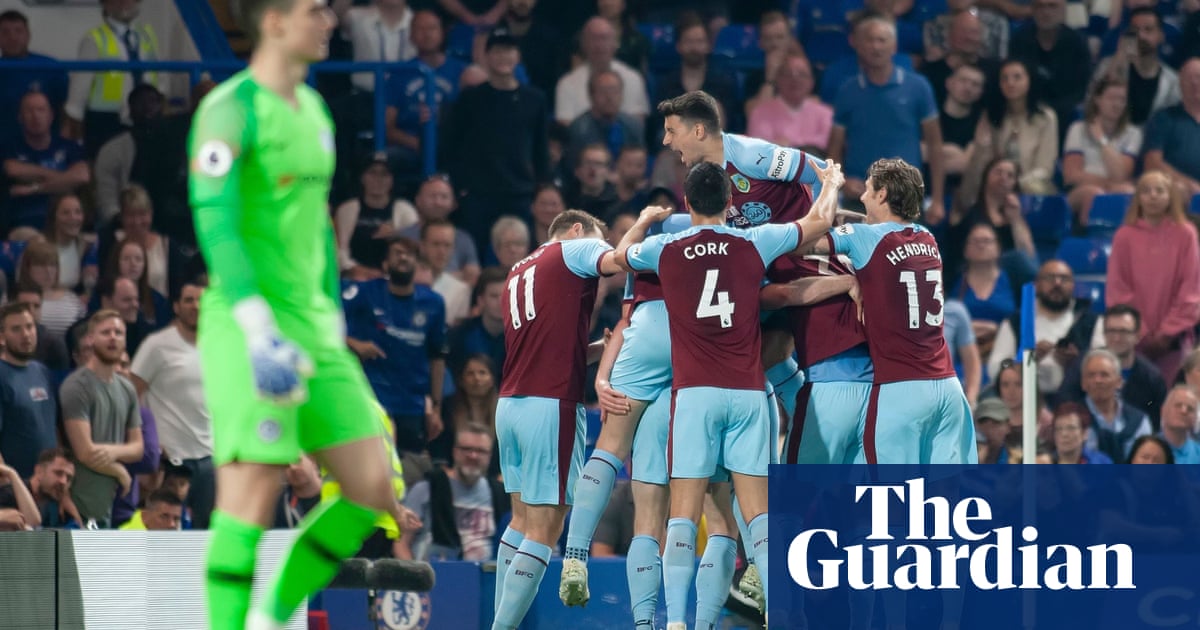 As the squabbles and scuffles erupted between players and coaching staff from the touchline to the mouth of the tunnel, Chelsea’s frustration was laid bare. They have become the latest team to stutter in their pursuit of a top-four finish over a round of Easter fixtures wasted by all those in contention but that tells only part of the story. The fractious draw that culminated in chaos as good as secured Burnley’s Premier League survival.

Exasperation had been building for Chelsea, incensed by the time-wasting David Luiz would later decry as “anti-football” and comments allegedly made from the opposing bench to Maurizio Sarri, and eventually it spilled over in stoppage time. The award of a free-kick near the touchline deep in Chelsea territory prompted a mêlée, with Mateo Kovacic squaring up to Jack Cork, David Luiz clashing with Ashley Barnes, and Olivier Giroud separating Dwight McNeil and Cesar Azpilicueta. Sarri, forever encroaching in front of the away technical area, scurried down the touchline to jab and growl his disapproval. Once Kevin Friend had dealt with the players he dismissed the Italian to the stand.

That was actually Chelsea’s first sending off of the campaign, and one that left Sarri so aggrieved that he waived his post-match duties as he was “too emotional” having been stung by some of the comments allegedly flung his way by Burnley’s staff. The verbal battle carried through to the final whistle. The fitness coach, Paolo Bertelli, seemed to spend most of those additional five minutes offering out anyone on the Burnley bench who cared to listen. The assistant manager Ian Woan laughed him off but the goalkeeping coach, Billy Mercer, eventually bit and duly confronted Bertelli, his opposite number Massimo Nenci and Antonio Rudiger, unavailable here due to a knee injury.

Others muscled in nominally to pull people apart but the free-for-all was prolonged and spilled down into the tunnel, where the pushing and shoving continued.

Even then, David Luiz and Ashley Westwood would go tête-á-tête as they retired from the turf. “I don’t know what you are allowed to say any more,” said Sean Dyche. “There were manbags, handbags, bumbags, some kind of bags in the tunnel. I didn’t see much of it. I was out clapping my fans.” That reflected a job well done by the visitors, with the 40-point mark secured and survival to all intents theirs. Burnley had scrapped, infuriated and, perhaps most significantly of all, undermined Chelsea with two set-plays back when the thrill of this occasion was still the football. Their recovery from a dreadful opening to this season has been impressive.

Yet, while they celebrated, the damage incurred was all Chelsea’s. Callum Hudson-Odoi limped away with a ruptured achilles, a player who has helped illuminate this team over recent weeks facing a prolonged period in rehabilitation and his hopes of excelling for England in the Nations League in June wrecked. An innocuous first-half fall on the touchline was all it took to curtail his campaign. His side’s efforts to rekindle some of the zest and attacking invention of their early forays duly ran aground on stubborn defence, their rhythm disrupted as Burnley slowed the game and the drain of the season taking its toll both mentally and physically. They could find no way beyond Tom Heatonand a mere point felt unsatisfactory. It may have lifted them back into the top four but, with those around them playing in midweek, their stay could be temporary.

All of which contributed to the furious finale overshadowing the brilliant rat-a-tat of the distant first half. Back then the hosts had showcased their fluent attacking best. There had been Ruben Loftus-Cheek’s barnstorming run from deep, Jeff Hendrick bouncing off him helplessly en route, and Eden Hazard’s tormenting of Matt Lowton as he sized up a cross. Twice the full-back thought he had his man covered, and twice he was hoodwinked and left embarrassed. He had barely picked himself up off the floor by the time N’Golo Kanté slammed in a fourth goal of the campaign from the Belgian’s pull-back.

Fast forward 113 seconds and Jorginho’s burst, Azpilicueta’s cute backheel and Gonzalo Higuaín’s slick spin away from Ben Mee sliced Burnley open yet again. The angle was unkind but Higuaín, already denied by Mee’s earlier goal-line clearance, thrashed in his team’s second off the underside of the crossbar. Yet, without Rudiger marshalling their rearguard, Chelsea’s vulnerability was just as glaring. Those goals had been sandwiched between the visitors’ own rewards, both conjured from neatly constructed set-plays.

Hendrick’s stunning volley, thumped in from the edge of the area after Azpilicueta had headed a corner only half clear, had opened the scoring. And then, just as Chelsea appeared to have wrested back the initiative, Ashley Westwood floated over a free-kick to Mee, his run beyond the far post unnoticed and the centre-half’s header was flicked on by Chris Wood and converted on the volley by Ashley Barnes. The striker had also been left alone to net an 11th goal of the season.

Thereafter, it all became a scrap, in every sense, and only one team would depart satisfied. Sarri had warned there would be twists still to endure in the pursuit of a top-four finish. He will have taken no pleasure in being proved right.

Mario Vrancic blasts Norwich past Blackburn and into the Premier League