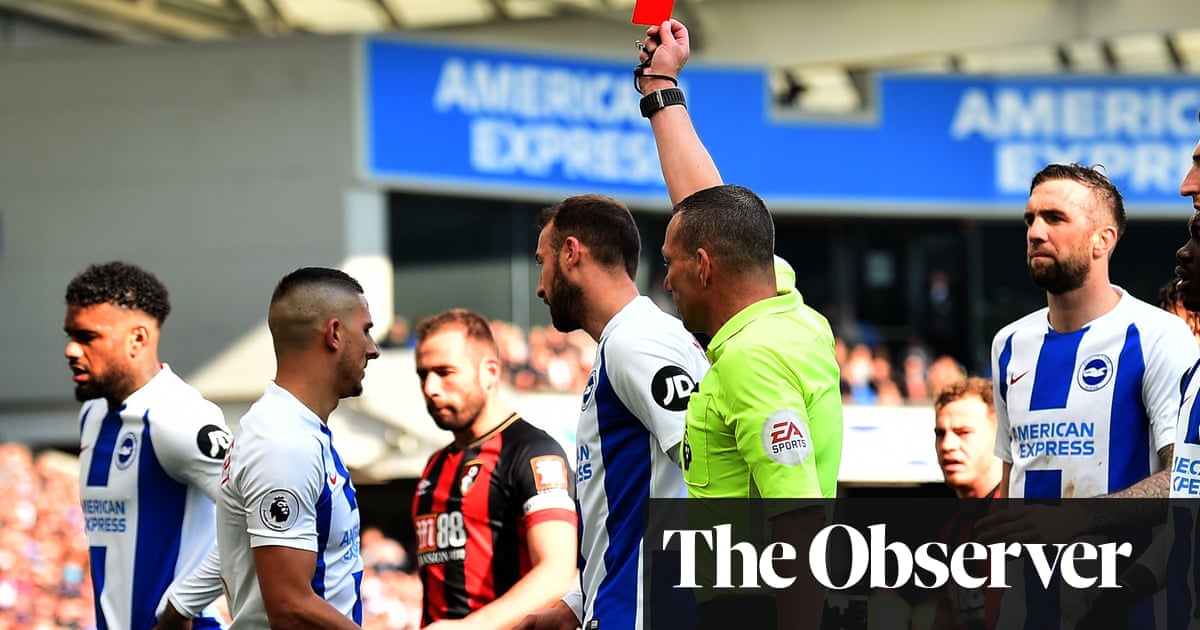 If Brighton do not end up surviving a second season in the Premier League then Chris Hughton will know they have no one to blame but themselves.

Goals from Dan Gosling, Ryan Fraser, David Brooks, Callum Wilson and substitute Junior Stanislas handed the points to a Bournemouth side who had won once since the 4-0 victory over Chelsea at the end of January. Brighton barely mustered a shot on target and Anthony Knockaert was sent off.

Only the intervention of the referee in Cardiff’s past two matches has meant that a dangerous situation has not become more critical for Hughton as they lost a second successive match at home and now face a crucial meeting with Cardiff here on Tuesday. On this evidence, they will be up against it.

Nathan Redmond hauls Southampton towards safety with win over Wolves

Having failed to score a home goal since the win over Crystal Palace in December, Glenn Murray was left on the bench as Hughton brought in Jürgen Locadia and Florin Andone in two changes from the side which fought bravely in defeat against Manchester City in last week’s FA Cup semi-final.

With Tottenham, Arsenal and Manchester City to come in three of Brighton’s final four fixtures, their manager had insisted before kick-off that he wanted to ensure safety before the end of the month but knew they would have to perform much better than in the defeat against Southampton here a fortnight ago.

Statistically speaking, Hughton could not have wished for better opponents with Bournemouth having lost 11 of their past 12 matches on the road in all competitions and seemingly already on their deckchairs. Yet having been outbattled in the home defeat to Burnley last week, Eddie Howe was given the response he had demanded with an impressive start that could easily have seen the visitors take the lead twice through Wilson and Josh King.

Both moves emanated from the quick feet of Fraser on the left wing but it was Brooks – deployed on the opposite flank – who was the architect of the opening goal. A superb piece of skill from the Wales midfielder picked out Wilson’s run and Gosling was on hand to finish with aplomb. An atmosphere that was already nervous suddenly became full of tension, with Brighton struggling to find a response despite the best of efforts of the energetic Yves Bissuoma and Knockaert. They left the field to a smattering of boos from the home supporters, although the news that Cardiff were trailing at Burnley would at least have cheered them up slightly.

Murray was sent to warm up immediately after the restart, just as Chris Mepham and Knockaert were squaring up to each following a clash off the ball. Both ended up being booked, although Mepham was perhaps slightly lucky to stay on the pitch after appearing to lean his head into the Frenchman’s forehead.

Spurred on by the perceived injustice, Brighton attempted to push forward but were almost caught out on the break when Wilson’s cross just failed to pick out King.

Less than 60 seconds later, Knockaert carelessly gave the ball away in his own half and the lead had doubled in the blink of an eye, Fraser curling home his seventh Premier League goal of the season after a precise pass from the England forward.

That was the cue for Murray to make his bow as Hughton also threw on Colombian José Izquierdo, yet still it was Bournemouth who appeared more likely to extend their lead. Any hopes of a late rescue act evaporated when Knockaert was shown a straight red for taking out Adam Smith with a reckless sliding challenge that completed a miserable afternoon for the Frenchman.

A brilliant run from Smith allowed Brooks to score a deserved goal after more good play from Fraser, who rounded off the win with another assist for Wilson. “We want five,” sang the Bournemouth fans. By the time Stanislas granted their wish in stoppage time, most of the Brighton fans were long gone and probably fearing the worst.