Skip to content
You are here
Home > Tennis > Andre Agassi: From Rebel To Philosopher 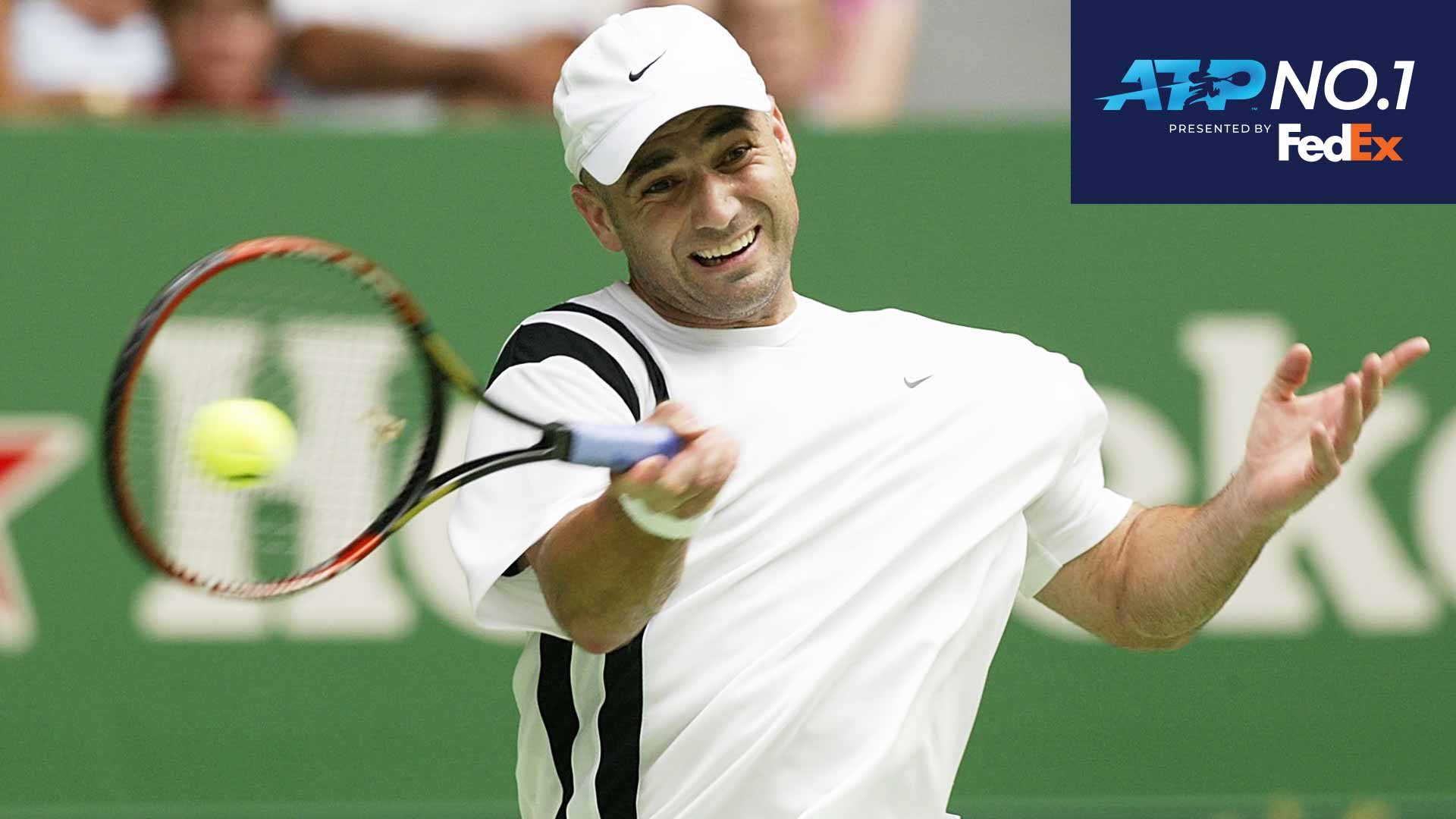 In the 12th profile of a series on the 26 players to rise to No. 1 in the FedEx ATP Rankings, ATPTour.com looks back on the career of Andre Agassi. View Full List

As No. 1
Agassi first became No. 1 in the FedEx ATP Rankings on 10 April 1995, unseating Pete Sampras and staying there for 30 weeks. Sampras took back the top spot on 6 November 1995 and finished that season as the year-end No. 1. Although Agassi became No. 1 again for a two-week run beginning on 29 January 1996, the remainder of his time leading the rankings wouldn’t come for several more years.

He reclaimed the No. 1 for three weeks after 1999 Wimbledon before dropping his position to Patrick Rafter, then regained it immediately following that year’s US Open and stayed there for 50 weeks. Sampras once again took over after the 2000 US Open.

Grand Slam Highlights
The American is one of only eight male players in history to achieve the Career Grand Slam. His maiden crown at a major championship came at Wimbledon, a tournament he skipped from 1988-1990. In 1992, Agassi outlasted Goran Ivanisevic in a five-set thriller to clinch the title and dropped to his knees in disbelief. He also finished runner-up at the All England Club in 1999 (l. to Sampras).

The American endured a pair of heartbreaking losses in the 1990 (l. to Gomez) and 1991 (l. to Courier) Roland Garros finals, but finally had his day in 1999 by rallying from two sets down to defeat Andrei Medvedev. The victory completed his Career Grand Slam and made him only the fifth man at the time to accomplish the feat.

But the US Open is the Grand Slam that Agassi is most synonymous with after 21 consecutive appearances from 1986-2006. His first New York triumph in 1994 (d. Stich) made him the first man to win the tournament as an unseeded player. Agassi prevailed again in 1999 (d. Martin) and clinched the top spot in the FedEx ATP Rankings for his efforts. The American also finished runner-up in 1995, 2002 (both l. to Sampras) and 2005 (l. to Federer), and fittingly ending his career at this event in 2006.

You May Also Like: From Rain To A Locker Room Dash: How Agassi Completed His Career Grand Slam

Nitto ATP Finals Highlights
Agassi competed 13 times at the season-ending championships, debuting in 1988 and making his last appearance in 2005. He prevailed in 1990 at Hanover, gaining revenge over a round-robin defeat to Edberg by defeating the Swede in the championship match.

The American also finished runner-up  in three different cities: Frankfurt (1999, l. To Sampras), Lisbon (2000, l. to Kuerten) and Houston (2003 (l. to Federer). Agassi advanced out of round-robin play on six occasions and compiled a career 22-20 record at the final event of the year.

ATP Masters 1000 Highlights
The baseliner racked up 17 ATP Masters 1000 titles, putting him at fourth on the all-time list. Fourteen of those victories came in North America and all but one was on a hard court.

Agassi consistently brought his best tennis to the Miami Open presented by Itau, winning his first Masters 1000 title there in 1990 (d. Edberg) and prevailing on five other occasions (1995-96, 2001-2003). He also won the the BNP Paribas Open in 2001, marking the lone year that he achieved the “Sunshine Double”.

Although Agassi often struggled at clay-court Masters 1000 tournaments, his dominant week at the 2002 Internazionali BNL d’Italia (d. Haas) is the only time he won a title at this level without dropping a set.

Rivalries
The rivalry between Agassi and Sampras is widely considered to be one of the premier rivalries in tennis history. Their sharp contrast in playing styles and personalities made their matches must-see viewing throughout the ‘90s and early 2000s.

Agassi trails 14-20 in their ATP Head2Head series and often came up short in their biggest matches, prevailing in just one of their five Grand Slam finals. But the brash baseliner did defeat his rival to win the 1995 Australian Open and dominated their clay-court battles (3-1). His most dominant period against Sampras came in his late-career resurgence as he went on a four-match winning streak from 1999-2001.

Agassi also produced numerous epic battles with fellow American Michael Chang, leading 15-7 in their ATP Head2Head series that spanned three decades. He swept the first and last four matches of their rivalry, but little separated them in many of their clashes throughout the ’90s.

Other prolific rivalries throughout Agassi’s career include those with Boris Becker (10-4), Patrick Rafter (10-5) and Roger Federer (3-8).

Legacy
Agassi’s three-decade evolution from teenage rebel to wise sage captivated fans worldwide. He burst on the scene as a 16-year-old wearing denim shorts and sporting a mullet, with his aggressive baseline game just as loud as his fashion. He told reporters that “image is everything,” a tagline that stuck with him throughout his career.

After alternating throughout the next decade between dizzying highs like his singles gold medal at the 1996 Atlanta Olympics, and shocking defeats, Agassi turned a new leaf at the end of 1997 and tirelessly devoted himself to his craft. His relentless dedication to fitness led to producing his most consistent run of top-level tennis in his 30s, when many of his peers had long since retired.

Agassi became a philanthropist in his post-tennis career and desired to empower kids with the academic education he never had. He created the Andre Agassi Foundation and launched the Andre Agassi College Preparatory Academy in 2001, a public K-12 charter school that serves at-risk youth in his hometown of Las Vegas.

Memorable Moment
After his FedEx ATP Ranking fell to No. 141 in November 1997, Agassi finished that year by playing a pair of ATP Challenger Tour events. Having been No. 1 just two years earlier, he now had to pick up his own balls and manually change the scoreboard during matches. But while some critics viewed his appearance at this level as a low point, Agassi saw it as the start of a comeback.

The drop proved to be what Agassi needed. He finished the year with a Challenger title in Burbank and, 12 months later, had climbed all the way back to No. 6 in the rankings.

“The great part about tennis is that you can’t run out the clock… As long as we were still playing, I had a chance.”

”I can live with losing. I can’t live without taking my chance.”

“We always had really tough matches and brought out the best in each other. Our rivalry transcended the sport. When people ask me who my great rival is, I always tell them Andre.”

Broadcaster/Journalist Graeme Agars
From the first moment he hit the headlines on the Tour, it was obvious Andre Agassi was not going to be just a tennis player. His career can be seen in two distinct halves. The first “image is everything” chapter cast him a rebel, breaking all the rules bringing a new energy and flamboyance to the game of professional tennis.

From his long blond locks to his flashy attire, Agassi moved the game into a new age of celebrity, marrying movie star Brooke Shields. From 1990 to 1995 Agassi reached seven Grand Slam finals, but won only three, prompting some to criticise him for being more about image than winning. By 1997 he’d had enough and by November that year his ranking slumped to 141.

Then came chapter two: a newly dedicated, focused and supremely fit Agassi, who climbed all the way back, reaching the No. 1 ranking in April of 2003, claiming five more Slam titles and completing his career Slam of all four majors. His rivalry with Pete Sampras was a highlight of his era, and it was perhaps closer than the 20 to 14 winning record Sampras established.

Off the court Agassi has been a true standout. A prolific fundraiser through numerous organisations including the Andre Agassi Charitable Foundation, the Andre Agassi Boys and Girls Club and the Andre Agassi College Preparatory Academy, he, along with his superstar wife Steffi Graf, have been major movers in the Las Vegas community. The two have also invested in many businesses that range from restaurants to nightclubs.

Need A Babysitter? Haase Is Your Man!

How Djokovic Dominated The Tie-breaks Against Federer