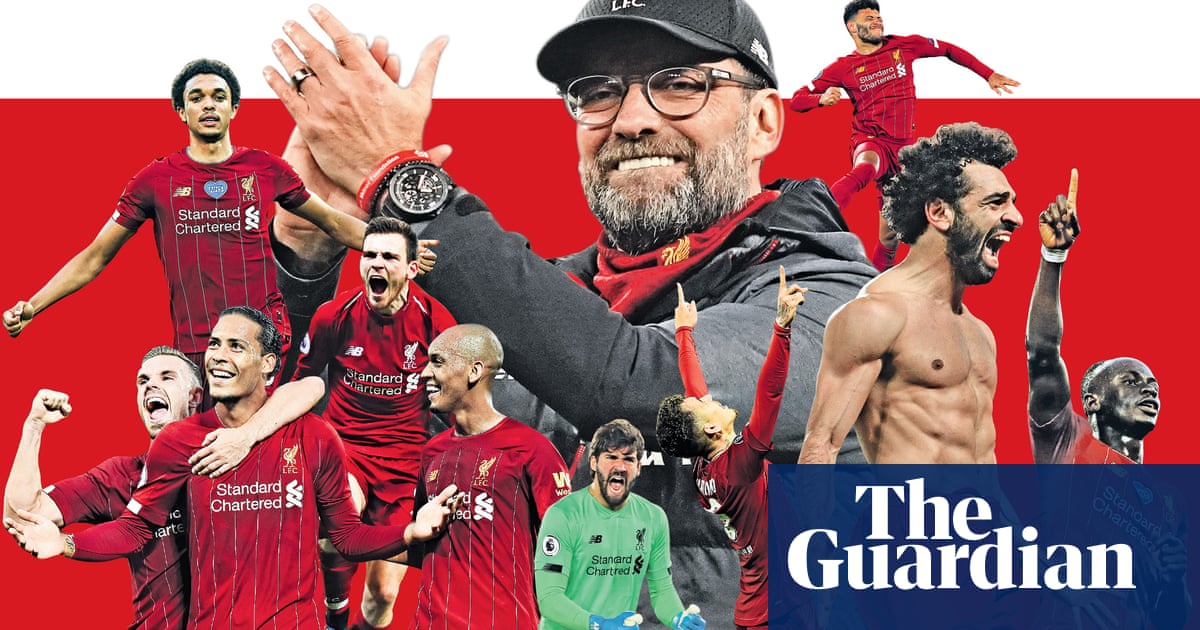 No asterisks. No caveats. And let’s face it, no contest. For the last few months a theory has been doing the rounds that the ersatz nature of the Premier League endgame, five weeks of press-ganged summerghost-ball, would drain the colour from Liverpool’s first league title in 30 years.

Fat chance. Death, plague and economic collapse may have stalked the land, puncturing sport’s ability to pretend the rest of the world is simply a subplot. But sport has many functions beyond simply flag-waving and Liverpool’s success will be deeply felt at a club where, as with every other club, football has always been a bit more than just football.

Not least for the players, a group of athletes who have achieved a kind of personal ultimacy in each other’s company, reaching out into the very limits of their own powers, and playing these last 18 months through a kind of fury.

Make no mistake, this was an annihilation. Liverpool didn’t just outrun the rest of the field. From late summer into spring they seemed to be operating to a different set of physical laws, marching the Premier League around in a headlock, ruffling its hair, flicking its ears.

The high point remains the 4-0 defeat of Leicester City on Boxing Day, one of those rare performances where each component part of a sporting machine appears to be operating with some intimate, shared knowledge of the other pieces. Either side of this there has at times been an air of double take about Liverpool’s run, of things happening that stretch credibility, that verge on some kind of sporting magic realism.

In this team full-backs are attackers, midfielders are defenders, wingers score goals, forwards chase and press

Here’s a team that won 26 of 27 league games from August to 28 February; that haven’t lost at home in the league in three years; a group of world champions whose best player is an unfussy centre-back, whose centre-forward can’t score at home, whose most creative force is a junior right-back, who have spent £92m net on transfer fees in the last five years.

This is not the standard version of annihilating success. How to explain it? Certainly, there has been a feeling that Liverpool are in some way cheating, floating above the waves, gaming the system.

Which is in fact the case, albeit in plain sight. This is the culmination of a clear and deliberate process, a vision of an industry with its own historic margins of irrationality and incompetence removed.

Let’s face it, at times watching English football has felt like a version of the sequence in Spinal Tap where the band perform on stage in front of an 18-inch model of Stonehenge. Tap’s manager blames this disaster on design instructions from lead guitarist Nigel Tufnel, which fatally confused inches and feet.

The point being in a dopey, daffy, largely irrational world, sometimes high-level competence can be enough. And English football has been run by Nigels, or dragged into a state of confusion by a sub-cast of Nigels for as long as you care to look back.

Imagine a version where the industry norm is cut away, where a football club is run to the same standards as any other high-functioning global business, where no one is as confused as Nigel. This has been the brilliance of this Liverpool regime. Where are their idiots? And is this actually fair?

In October it will be 10 years since Fenway Sports Group bought Liverpool, John Henry announcing: “We’re here to win,” from the steps of the high court as a deal was forced through. Oh yeah? Liverpool were £351m in debt. A team featuring Paul Konchesky, David N’Gog and Christian Poulsen were in the bottom three in the Premier League. Nobody knew what to do about Anfield.

And yet Henry was attracted to Liverpool precisely because they were in this state. Here was a commodity bottoming out, a global brand that was all inefficiencies, all development potential. A club, an industry, a hard-won sporting heritage was ready to be money-balled.

It took a while. There was still time to sign Andy Carroll and Charlie Adam, to churn through a cast of minor players, to fail to micro-manage the disastrous Luis Suárez race affair.

Things have been steadily fixed. Two competent, sensible managers have been employed across eight years. A data-driven, non-emotive recruitment policy has registered more hits than misses. Players have been coached and improved rather than discarded or indulged.

There has even been a disruptive element to Jürgen Klopp’s tactics. In this Liverpool team full-backs are attackers, midfielders are defenders, wingers are goalscorers, centre-forwards chase and counterpress.

Physicality has also been key, another margin to be worked, a team where every player is supremely fit and strong, and where opponents have often simply dropped off, exhausted after 70 minutes.

The final steps came in a rush from this powerful base. Two years ago Klopp’s Liverpool were still 25 points behind Manchester City. The current season, a title won with seven games still to play, is an achievement that will stand with any team raised in the modern era.

But it also feels like a summit, something that, even now, will need regearing to sustain this level. No asterisks. No blind spots. No snags within the machine. And no standing still from here.

Carolina Rozo: ‘It started with words. He would tell me I was very pretty’

Roger Goodell admits ‘we were wrong for not listening’ earlier, encourages all to peacefully protest